Turkish Yogurt Dip Cacik is such a tasty side dish that pairs well with any dish. It is made with plain yogurt, cucumber, garlic and mint. So easy to make and ready in less than 10 minutes.

This Turkish yogurt sauce recipe is a staple in Turkish cuisine. We pair it with several dishes from kebabs like doner kebab, chicken kebabs and Turkish meatballs  to meatless dishes like imam bayildi and menemen.

If you eat at a Turkish restaurant, you will definitely see cacik as the first or second item in the side dish or meze section on their menu. It is one of the side dishes served with kabobs too.

We have an obsession for meze type of dishes and cacik is our all-time favorite. We make it almost everyday to serve with whatever we cook for dinner. You can’t imagine how easy and simple yet so addictive it is.

Cacik is one of the oldest dips or sauces. It is originally a Middle Eastern food and probably the most popular side dish in Turkey today. You can pair any food with this Turkish yogurt sauce.

Cacik is basically a combination of plain yogurt, cucumbers, garlic and dried mint. Turkish restaurants, lokanta as we say in Turkish, even have meal deals including cacik.

Some main dishes from these meal deals are bean stew( kuru fasulye), izmir kofte (meatballs and potatoes in tomato sauce) and karniyarik (Turkish style stuffed eggplants). These are always paired with rice pilaf or bulgur pilaf and cacik.

There are two versions of cacik in Turkey.

One is in the form of a thick dip and called kuru (dry) cacik as it contains very little amount of water or no water at all. This one is made with strained yogurt, which is known as Greek yogurt in Europe or in the US. It is the one served as a meze dip.

The second version is in the form of a cold soup and has a thin and runny texture. It is made either with homemade Turkish yoghurt or strained yogurt. No matter which yogurt you use, you mix it with some water to make it runny like a soup. The amount of water you use depends on how runny or thick you prefer it. This one is like a cold cucumber soup served as a side dish to pair with a main dish.

When made with strained yogurt, it might be confused with yogurt and feta dip called haydari, but cacik contains cucumber and no feta cheese.

Are Cacik and  Tzatziki The Same?

Although Turkish cacik and Greek tzatziki look and sound the same, they are not completely the same. Let's learn how different they are.

The first difference between these two dishes is about the texture. For one thing, tzatziki is always thick and served as a dip while cacik could be either thick or as runny as a soup.

Also, the cucumbers added are in different forms. In a tzatziki recipe, you grate them first and then strain the grated cucumbers with the help of a cheese cloth or a fine mash strainer to remove the excessive juice. The seeds of cucumbers are often removed as well. On the other hand, in a cacik recipe, you just dice the cucumbers into small pieces and seeds are never removed.

Another difference is about the flavorings. Authentic cacik is flavored with dried mint, which has a more aroma than fresh mint. The dried mint used is mostly known as spearmint. There is a variation with fresh dill too, but not as common. On the other hand, authentic tzatziki doesn't use any spice or herbs. The main aroma of tzatziki comes from garlic. Turkish cacik also has garlic but the amount is not as much as in its Greek cousin.

Also, there is vinegar (or lemon juice) and olive oil in a tzatziki recipe while we don't have these in a cacik recipe.

As for the toppings, cacik is often topped with extra virgin olive oil and some extra spices like dried mint, red pepper flakes (pul biber) and sumac. Fresh mint leaves or chopped fresh dill might also be used for garnish. Similarly, tzatziki is optionally topped with olive oil and fresh dill.

Why you should make this recipe?

Main ingredients to make cacik are as follows:

Although it's not a must to have toppings on cacık, you can take this simple yogurt cucumber dip to a whole new level with a few extra additions. So after sharing it into small bowls, drizzle some extra virgin olive oil, sprinkle dried mint, red pepper flakes and sumac on it. Serve immediately.

If you make it in the form of a thick yogurt cucumber dip, serve it as a meze with several other foods like pide bread, lavash bread, eggplant salad, baba ganoush and acili ezme. All these are served together at local Adana kebab restaurants.

If you make it in the form of a cold soup, serve it in small individual bowls and spoons. It is traditional to serve delicious dishes like beef stew, stuffed peppers (biber dolma) or Turkish style green beans with a bowl of fresh cacık.

What is Greek yogurt called in Turkey?

It is known as suzme yogurt, which means strained yogurt. And it is way thicker than the ones sold under the name 'Greek style yogurt' in the US or Europe.

How long does cacik last in the fridge?

It lasts 2-3 days, but it won't be as tasty as when it is freshly made. It is better to make it in small batches so that you won't have any leftovers.

Can I freeze cacik?

We don't recommend that. Cucumbers in the yogurt become mushy and watery when thawed. So it tastes much better when fresh. 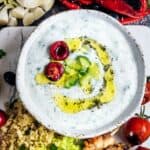 For the optional topping: