Strained yogurt, also known as Greek yogurt, is incredibly easy to make and doesn’t require a ton of labor. It makes a lusciously thick yogurt that is creamy and delicious. You can use it as-is, or incorporate it into dishes, and even use it as a substitute for cream on top of desserts.

You can use homemade yogurt or store-bought yogurt to make a thick strained yogurt like this. You will be proud of yourself after straining yogurt and you will be amazed at how delicious it tastes. It is so good that you will want to use it in any way you can. And it is super easy to make!

We love our homemade Greek yogurt with a drizzle of olive oil and some chili flakes on it. One of the best mezzes! You can spread it on a slice of bread and enjoy. Everything you make with strained yogurt goes up to the next level. One of our all time favorite meze is made with strained yogurt and feta cheese called Turkish haydari.

And you can use it in all the recipes with yogurt including ayran drink. You end up with a unique taste that is addictive!

So strained yogurt in Turkish cuisine is known as the advanced or concentrated form of regular yoghurt. It is more special and the dishes taste even better when they are made with it. Turkish eggs would be a great example for these dishes.

What is strained yogurt?

Strained yogurt or Turkish süzme yoğurt is the yogurt that you have after removing its whey. So we will be explaining how to strain yogurt here, rather than giving a yogurt recipe from scratch.

The main difference is the structure. While regular yogurt is thinner (because of the whey inside it) and pourable as you see in the picture above, strained yogurt is very thick and concentrated, so it is spreadable. This thick yogurt looks can even be called yogurt cheese due to its solid and spreadable structure. But it has nothing to do with cheese, it is still yogurt with a more concentrated flavor.

The second difference is the taste. The liquid called whey is removed from yogurt as it drips in a bowl, so this thick yogurt has a denser and richer taste. We sometimes mix the yogurt with a little salt after it is strained and then keep it in the refrigerator. It gets more on the savory side with the addition of salt.

There is also “Greek style yogurt” at UK and US markets. We must honestly say that they are waaay thinner than the original one. You can buy one and use it to make your own thick Greek yogurt at home.

Strained yogurt is a staple in Turkish cuisine and it is considered to be a tradition in many households. Many homes even have special yogurt straining bags, yogurt kesesi, made from a similar material to cheesecloth (picture above).

Yogurt is poured in this bag (kese) and it is hung somewhere high. A bowl is placed below it so that the whey drips into it. They don't even put it in the fridge. The yogurt comes out is really thick and tastes a bit sour, in a pleasant way.

Why do we strain it?

Plain yogurt: It is the main ingredient that you need for this DIY Greek yogurt. You can use whole, low fat, or no-fat yogurt. It has to be regular plain yogurt. Here in the UK, we use Greek style yogurt we buy from Aldi.

“Plain yogurt” has one meaning. It is any yogurt that doesn’t contain any sweeteners, extracts, or fruit pieces – any type of flavoring ingredient really.

A pinch of salt: can be added and mainly functions as a flavoring ingredient. This is optional and you can skip it especially if you are planning to use your thick yogurt in smoothies or breakfast parfait.

Besides yogurt and salt (if you want to use), you need some equipment. And, there is really no need to buy a Greek yogurt strainer. You need the following: A fine mesh strainer or a colander, a bowl larger than these and a muslin. You don't have a muslin, don't worry. You can also use a cheesecloth, nut bag, thick paper towels or even paper coffee filter!

When making Greek yogurt (creamy thick yogurt), you will need to let the yogurt sit for roughly 8-10 hours. You see how it looks after 8 hours in the pictures above.

And, if you want to make labneh or yogurt cheese(super thick yogurt), allow it to sit for 24-48 hours. This might change depending on the yogurt you use. So check it after 8 hours and decide whether to continue or not.

It is thick enough for us and all the whey is removed after 8 hours. But check yours and if it still has some whey when you mix with a spoon, let it sit there for another 2 hours.

This thick yogurt can be used in many traditional Turkish dishes. The most popular ones are: manti, iskender kebab, yogurt dip cacik, or tzatziki and yogurt soup. Basically, it can be used in almost all the dishes where you use regular yogurt. You might just need to mix it with a little water before using it in some dishes though.

You can also substitute sour cream and cream cheese for thick strained yogurt. And, it can substitute the mayonnaise in recipes like no mayo deviled eggs, pasta salad without mayo, and even a simple low fat coleslaw with yogurt.

Greek yogurt can be used in many fruit desserts and be a creamy topping for poached quinces, pan-seared peaches, or baked pears. It can even be used to top cupcakes.

We hear the same question over and over: Is labneh the same as Greek yogurt? Well, there aren’t many differences between labneh and Greek yogurt.

Basically, labneh has a much thicker texture compared to that of Greek yogurt because it has been strained for much longer (meaning more whey has been removed).

Labneh is also called yogurt cheese and is essentially a super thick yogurt. It is often shaped in mini balls and stored in a jar with olive oil.

We should also note that there is a type of cheese called "labne" in Turkey and it is not the same as this one. It is often used as a substitute for mascarpone.

How long should you strain yogurt?

8-10 hours would be enough to make thick Greek yogurt. If you want a much thicker yogurt known as labneh, you need 24-48 hours. These are average numbers and this might change depending on how much whey a yogurt contains.

What can I do with the liquid removed from strained yogurt?

The liquid in Greek yogurt that separates is called whey. Use it when making breads. Whey helps make them softer. You can also use it as a fertilizer for the soil so that your plants grow better.

No, it doesn’t. The protein content of Greek yogurt is actually twice as much compared to regular yogurt.

Can I freeze yogurt whey?

You can definitely freeze whey for up to six months! Simply place it in an airtight container and freeze. 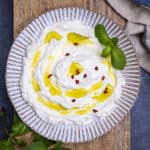 It's very easy to make your strained yogurt at home using a simple strainer, a bowl and a muslin.