If you're looking for an easy, delicious, and filling hot soup to make during these colder months, then look no further! This Turkish Yogurt Soup (Yayla Corbasi) doesn't require a ton of preparation or steps, only contains basic and natural ingredients, and is incredibly filling and healthy.

Have you combined yoghurt and mint in a recipe yet? Give it a try with this yayla çorbası or make a cold and refreshing Turkish cacik and see how well they go together.

Yayla corbasi, or Turkish yoghurt soup, is a traditional Turkish hot soup from the northern regions near the Black Sea, however it is commonly found all over Turkey. Each region has its own twists to the recipe, but the base remains the same.

This is a rice soup with yogurt topped with a mint sauce. What makes this specific soup recipe amazing is the cooking method used and the basic ingredients it contains.

It is incredibly healthy, very light yet filling, has perfectly balanced tangy and salty flavors, and can be served with a wide variety of breads like Turkish hot water cornbread or Turkish flat bread called bazlama.

Today, we will be having a look at this delicious traditional yogurt soup! We will discuss all the ingredients used, alternatives and substitutes, traditional toppings or additional add-ins, and of course, how to actually make the soup itself.

The most important ingredients in a traditional yayla corbasi recipe are the rice and yogurt.

When choosing a rice for this recipe, the best type would be a white long-grain rice like Basmati, Jasmine or Turkish Osmancik rice. You can of course use other types, however, it will affect the flavor and cooking times.

This Turkish soup is traditionally made with plain homemade yogurt. You can have a look at our homemade yogurt recipe from scratch that works perfect for this soup. Homemade yogurt like this one has a thinner consistency compared to store-bought yogurt and is also much healthier. It also doesn’t contain any preservatives, colorants, or thickeners. So why don’t you make your own yogurt?

Can I Use Greek Yogurt?

You can definitely use store-bought or homemade Greek yogurt for this recipe. Often Greek yogurt is also labeled as "double-thick" or "double-cream". These are the same type of yogurt, just with a different name for legal purposes.

The biggest difference you will see is that store-bought Greek yogurt is much thicker than homemade yogurt. This won’t affect the recipe much and you won’t even notice the difference.

This yayla corbasi recipe is extremely easy to make! Because the majority of the time is waiting for the rice to cook, you can easily make this while preparing additional dishes, or even just when you're extremely busy.

First, cook the rice. Combine the 4 cups of water and rice in a large pot and bring it to a boil. Allow the rice to boil until it is fully cooked through and tender.

Fourth, add the yogurt mixture to the rice. Once the rice has been fully cooked and the yogurt has been warmed, slowly add the yogurt into the pot of rice while continuously stirring to incorporate them evenly.

Fifth, allow the mixture to boil. Once you’ve added the yogurt, stir for a few minutes then leave the mixture to boil uncovered for another 10 minutes. Do not cover the pot with a lid as it might boil over. Once the soup has finished cooking, season it with some salt.

Seventh, garnish and serve. Once all your components are ready, you can dish the soup in a bowl and either serve the butter-mint sauce on top or on the side. You can garnish your soup with some fresh mint sprigs or red pepper flakes.

Yayla Corbasi doesn’t have a ton of “traditional toppings”. Most often people garnish the soup with additional fresh mint leaves or sprigs, and sometimes even red pepper flakes.

The fresh mint leaves give a beautiful simple contrast to the filling rice soups, while the red pepper flakes bring in an entirely new flavor element.

If your soup includes chickpeas, additional pan-fried spiced chickpeas can also be added as a garnish.

How to Add Yogurt to Soup Without Curdling?

A cook’s worst nightmare is spending a ton of time on a dish and once adding the yogurt, it completely curdles.

There is an extremely simple solution to this problem that most recipes don’t share with you.

The easiest and safest way to do this is by slowly adding boiling hot water to the yogurt and mixing it in (see step 3 in the recipe above).

A very common traditional ingredient that you will often find in this soup are chickpeas. If you are adding dried chickpeas, make sure to soak them for about 1-2 hours before adding them to the soup. You can add them during the final 10-15 minutes of boiling.

If you are adding canned chickpeas, simply rinse and drain them, and also add them during the final 10-15 minutes of cooking.

Other fun ingredients you can include are green onions, leeks, or spinach. These aren't traditional ingredients, but they do give a lot of color and delicious flavor. These ingredients cook very quickly, so if they are sliced, they can be added during the last 5 minutes of cooking. 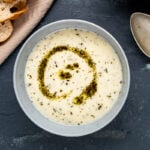 A tangy comforting soup with yogurt and rice. The butter sauce with dried mint on the top takes the soup to the next level!

If you aren’t careful about the following tips, your soup doesn’t have the right consistency and yogurt might curdle.