Turkish Shepherd Salad known as Coban salad is made with fresh summer tomatoes, cucumbers and onions. The flavors of sumac, lemon juice and olive oil make it wonderfully tasty and refreshing. Ready in 5 minutes and disappears that fast!

It is a super easy shepherd salad recipe with a super simple Turkish salad dressing. We have this light and healthy salad as a side dish. Our favorite meals to pair with it are Homemade Turkish Meatballs and kabobs.

Shepherd Salad is one of the most popular and traditional Turkish salads. Although we have it as a side dish with anything almost everyday in summer, it is mostly known as the Turkish salad for kabobs. The combination of lemon, vinegar and the spices (sumac and red pepper flakes) results in an extremely appetizing salad. I must warn you that it makes you eat more of whatever you pair it with. I don't think you would complain about this though.

What to Eat with Turkish Shepherd Salad

Today, this salad doesn’t belong to shepherds only, everyone in the country loves it because it's super easy to make and super tasty. It is generally served with kabobs like Fajita Steak Kabobs, meatballs, chicken dishes like Simple Roasted Chicken or even with a kind of pasta like this Pasta with Cheese and Meat Sauce or pilaf like our Bulgur Pilaf with Lentils. Also, this salad is served before the main dish in restaurants to keep the customers busy with the salad while they are waiting for their order.

We love to dip a piece of bread in this salad. Although we don’t want to finish it before our kabobs arrive on the table, it’s almost impossible to stop eating it. We sometimes order a second one to accompany our main course. And there is always extra vinegar and olive oil in bottles served on the table for those who want to add more of these in their salad.

Traditionally, Turkish shepherd salad is served in an oval dish and you can garnish it with a few olives before serving.

How to Make Turkish Salad Dressing

The dressing in this salad is quite versatile. There are two main ingredients: Freshly squeezed lemon juice and olive oil. You can't think of the salad without these two. Although the other ingredients like vinegar and pomegranate molasses are optional, you can hardly see a person refusing to use these. The amount of the ingredients for dressing depends on personal taste. I want mine with lots of lemon juice and olive oil but with little vinegar and pomegranate molasses.

Traditionally sumac is a must in this salad, but you might see salads without any spices or dressing at some restaurants. They leave it to the customers and serve some spices and dressing ingredients on the table. You decide the amounts and add each into your salad. If you are at a kebab restaurant though, the salad is completely ready.

Sumac is a very special spice and you can't just add it in the dressing. Sprinkle it over chopped onions and massage them with sumac. This removes their bitterness and gives them a nice pinkish color. We even have another salad with onion and sumac named Onion Salad.

If you don't mind a little heat in your salad, you should add another great spice in your salad: red pepper flakes, which is my husband's obsession. I think you can easily find these at Middle East markets.

Another spice my mom loves to use in this salad is dried mint but I think it's her personal creation. I use it when we don't have fresh parsley on hand and love the taste, but it's totally optional.

I think the original names of dishes are as important as their flavors, so I must start with a brief explanation on  the local name of the chopped Turkish salad. This salad used to be the main dish of shepherds in Turkey.

In the past, a village had generally one shepherd and everyone entrusted their cattle to him. People in that village would give shepherds some foods they produced in return. These  might be wheat, flour, vegetables, fruits, molasses, dairy products, etc. Although there are still people who pay their shepherds with such foods, paying money is more common today.

A shepherd hits the trail early in the morning and takes a bundle of food with him that includes tomatoes, cucumbers, peppers and onions (the basic ingredients of shepherd’s salad) and a little bread. All of these vegetables are grown in the village yard and the bread is of course made by the women of that village. He prepares a quick lunch with these. Maybe some cheese or olives accompany this easy chopped Turkish salad but nothing more.

A typical Turkish shepherd has a few dogs with him, and these dogs are called shepherd’s dog. This name is also the name of that breed of dog. They are the best friends of him as they help him control the herd. Also, if the shepherd falls asleep, the dogs become the guard of the herd and the shepherd. These dogs  protect them from wild animals like wolves or thieves.

Another important characteristic of a typical Turkish shepherd is that he plays a special instrument called shepherd’s pipe (kaval in Turkish). This instrument is made of a plant like reed. Especially sheep and cows love the sound of kaval. The rhythm of its music is so important as it makes the animals more submissive. The shepherd plays a slow music when the animals are drinking (is it the right verb here?) water from a river and he plays a more rhythmic music while they are grazing. 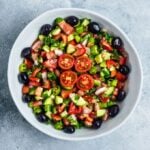 A refreshing and tasty salad with just a handful of ingredients. Ready in 5 minutes!