Turkish White Bean Salad Recipe called Piyaz is a super tasty side dish that is packed with Mediterranean flavors. Combine white beans, tomatoes, onions and parsley, and then flavor them with a tangy salad dressing. Simple yet deliciously satisfying!

Piyaz salad is one of the easiest Turkish recipes that you can make in less than 15 minutes. Just like the world-famous Turkish shepherd salad, this white bean salad is a staple side dish in Turkey and pairs well with any dish you want.

Love such easy yet satisfying salad recipes? You might want to see our bulgur salad kisir, Turkish potato salad  and Turkish eggplant salad  too.

Piyaz, pronounced as pee-ahz', is a simple Turkish bean salad recipe that you can find at any Turkish restaurant. Traditionally, it is considered to be the best companion of Turkish kofte. In Turkey, there are even kofte piyaz places which serve only Turkish meatballs, aka kofte and piyaz. You can't find anything else on their menu. Oh and yogurt drink ayran to accompany these.

This is a very simple side dish made with beans, tomatoes, onions and parsley. Then it is flavored with a salad dressing made from vinegar, olive oil and lemon juice. Another flavoring ingredient that gives piyaz salad its original taste is sumac. Please read on to learn how to incorporate this tangy spice in this salad.

This cold white bean salad is also known as one of the tasty side dishes for kabobs. Almost all kebab restaurants have it on the menu, along with cacik, roasted onions and ezme salad. So if you love kebab recipes as much as we do, you should give this bean salad a try. It pairs wonderfully with Adana kebab, lamb kebabs and chicken kebabs.

Piyaz recipe has no strict measurements of ingredients indeed. Everyone can adjust it to their taste. You will always find vinegar and olive oil in bottles on the table at restaurants so that you can add extra on your salad.

You might see different versions of bean salad in Middle Eastern, Greek and Armenian cuisines, but today we are sharing how we make it in Turkish cuisine.

Why Should You Make This Recipe?

This Turkish salad recipe with white beans is made with a few fresh ingredients and a very simple salad dressing. Let's see them in detail.

Prepare the onion: Make thin slices in half moon shape. Sprinkle a pinch of salt and 1 tablespoon of sumac on them. Massage them altogether with your hands for 10-20 seconds. This will help the onions taste better. Put them in a large bowl.

Prepare the remaining salad ingredients: Rinse the canned beans under cold water and drain them. Chop the tomatoes and parsley. Put all of them in the salad bowl.

Make the salad dressing: In a medium bowl, whisk together the olive oil, lemon juice, apple cider vinegar (or grape vinegar) and salt.

Assemble: Pour the dressing sauce over the salad and give it a good stir. Top with slices of hard boiled eggs if you want. Sprinkle extra sumac and drizzle extra olive oil over them and serve.

Bean Piyaz with Tahini: This special Turkish bean salad is called Antalya piyazi, which is the second famous version after the classic one. It is one of the local dishes in Antalya province, a famous city located in the South coast of Turkey. So it takes its name from this city.

Although they are not as popular as white beans, there are a few other options to make piyaz. For example, you can substitute chickpeas, black eyed peas or even potatoes(boiled and diced) for white navy beans.

Although it is often served with kofte or kofta kebab, this delicious salad can be served in several other ways.

Put the leftovers in an airtight container and store it in the refrigerator for 2-3 days. Bring it to room temperature and drizzle some extra virgin olive oil when serving.

Can I make piyaz ahead of time?

Yes you can. It makes a perfect food for picnic or potluck parties as you can make it ahead of time. Adding the dressing on the day you want to serve may be a good idea though so that the salad won’t get too juicy.

What does piyaz mean in Turkish?

Piyaz is a word to describe a salad with onions, sumac and parsley flavored with a tangy dressing. Although the most popular one is made with white beans, you can make it with other beans, peas, broad beans or boiled potatoes too. 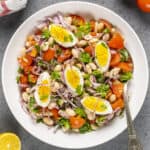 A tangy white bean salad with tomatoes, red onions and parsley. It is flavored with sumac and a simple salad dressing with olive oil and vinegar. So easy to make and ready in 15 minutes.