This Vegetarian Stuffed Eggplant Recipe is also known as Turkish Imam Bayildi. Baked or fried eggplants are stuffed with tomatoes, onions and peppers and then baked again. One of the tastiest summer dishes that is served cold, with a generous amount of olive oil. 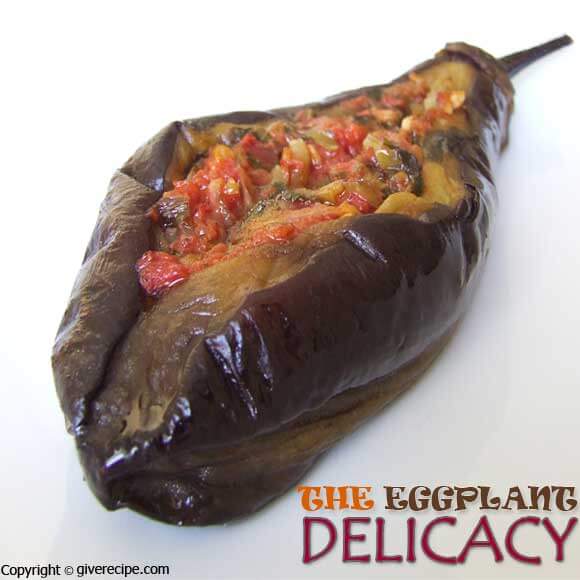 This beautiful vegetable with purple dress is one of my favorite, and of all Turkish people, so we have many different dishes made from it in our cuisine. I always think that eggplant (patlican in Turkish) is like a woman ready for a party with her showy clothes, looking so charming. In Turkish we even use eggplant to define the color purple, we call that color ‘eggplant purple’. We generally see these beauties during summer and fall at bazaar. They have mainly two kinds in Turkey. One of them is short in height and plump, like a pear in shape, but fatter than it, which we call “bostan patlicanı” (garden eggplant) in Turkish. And the other, which I used for this dish, is in average size, like a zucchini and we call it “kemer patlican”. I don’t know if these two kinds have special names in English. If you know, I'd be so glad to hear.

A Word on Eggplant Types

As for the name of this traditional Turkish dish, I didn’t translate it into English as it may sound nonsense. The pure translation is this: The Imam Fainted. Funny, isn’t it? I love not only the dish itself, but also its name. There are several versions of the story of this name. But I want to share the most common and the shortest one. Here it goes!

The Story of Imam Bayildi

Once upon a time, there was an imam in a country. He picked some eggplants from his garden on a hot and muggy summer day and took them home. He asked her wife to cook a tasty dish with these eggplants. His wife wanted to make a different dish and she first fried the eggplants, cooked tomatoes, peppers etc in another pot and combined them in a boat shape, then cooked it in oven. However, she put too much oil to the dish. The imam couldn’t refuse to eat it, but fainted at the end of his meal with the effect of hot weather and too much oil. His wife screamed “the imam fainted!” (imam bayildi). Since then, this dish has been called imam bayildi.

In another version, it is said that the imam fainted even before eating, when he saw the amount of the oil in the dish as oil was so expensive those times.

I don’t love frying something in a pan as I have to clean all the kitchen afterwards, I prefer doing this process in oven. How? It’s in the recipe.

If you get curious enough about imam bayildi, let me stop telling stories and give its recipe.

How To Make Imam Bayildi Recipe 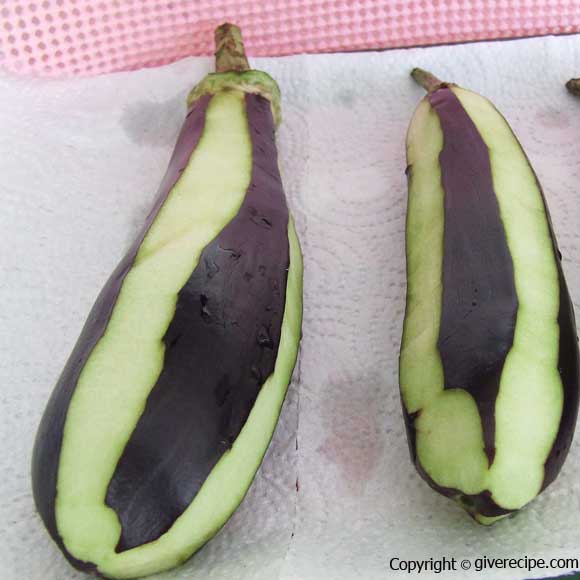 Wait the eggplants for about 15 min. in a bowl of salted water to remove their bitterness. Then squeeze them gently and dry with paper towel. To let the heat enter their inside, pierce them on their several parts with a fork. 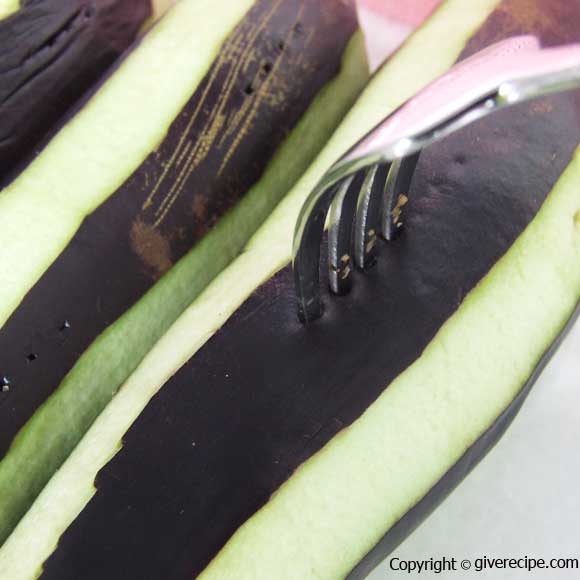 Oil a small baking pan and lay the eggplants in it. Then brush them with olive oil. Bake in oven until they get tender enough (about 30 minutes). You can check it with a small knife.

Meanwhile, we can prepare the filling. Heat olive oil in a pot and saute the onion. Add peppers and saute. Add tomatoes and garlic, cook it about 5 minutes. Put 2 sugar cubes and enough salt in it. Add fresh mint and parsley.

Take the eggplants out from oven. Cut their stomachs so gently, not too deep. Grab a dessert spoon and give it a boat shape by moving their sides gently aside. 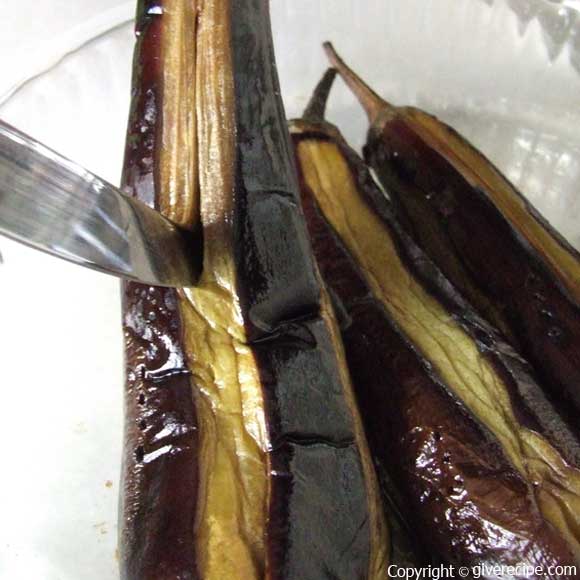 Now put the filling mixture evenly into their opened stomach. And pour ¼ cup water in the tray. Cook it in oven at 180C for 40 minutes. 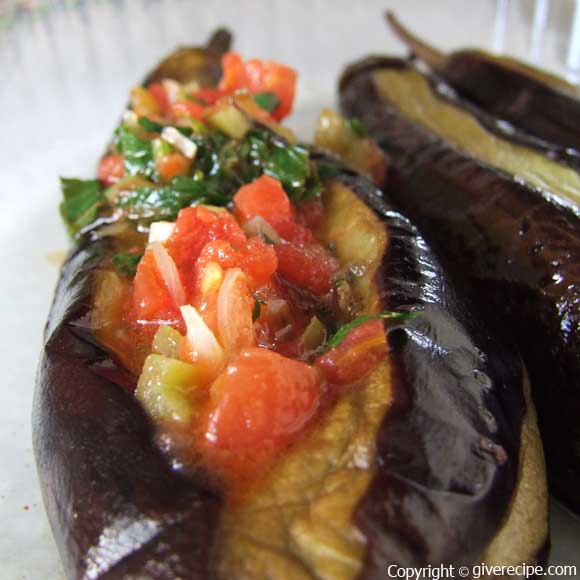 This is a kind of traditional Turkish olive oil dishes that may be served warm or cold either as a main dish or as a side dish. Personally, I love to eat it dipping some bread into its ‘stomach’ and a cup of yogurt goes very well with it. 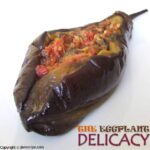 Baked eggplants are stuffed with a cooked mixture of onion, tomato, pepper, garlic and herbs. Then they are baked for the second time. 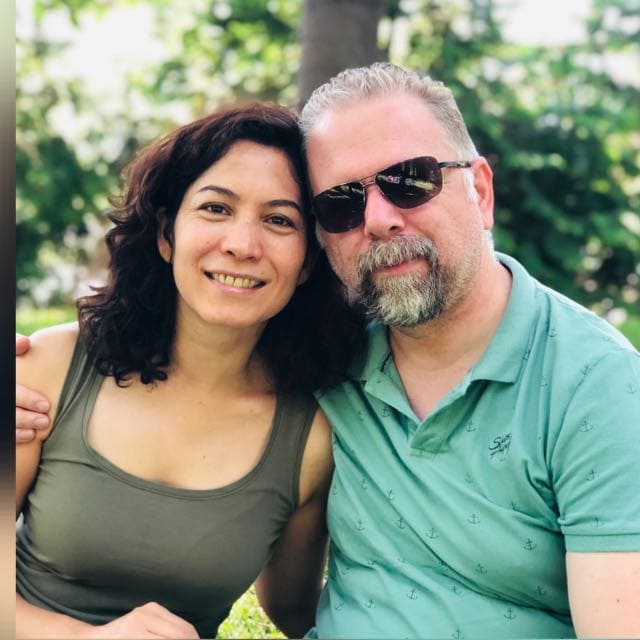