Stuffed Dried Eggplants and Peppers are one of the best dolma recipes in Turkish cuisine. Dried veggies are always way more flavorful than fresh ones and that's why these taste divine!

We have an obsession with stuffed vegetables or dolma as we say in Turkish. Dolma is one of the most traditional Turkish recipes and it can be made with a variety of vegetables. We often make biber dolma, stuffed bell peppers in summer and stuffed dried eggplants and peppers in winter.

What is Dried Eggplant and Pepper?

Have you ever visited Turkey? If yes, you might have seen batches of dried eggplants and peppers on strings hanging at bazaars or spice shops. Among several other dried vegetables and fruit, these two are the most popular ones.

How are eggplants and bell peppers dried? The flesh in fresh eggplants are hollowed out with a corer and the inner side is rubbed with salt. Then they are lined on a string with the help of a needle and dried under the sun.

A similar method is used for green bell peppers. Their top is cut off and seeds are removed. They are dried under the sun on strings and they get a reddish color as they are exposed to sunlight.

Traditionally, eggplants and bell peppers were dried for winter months when it wasn’t very easy to find the fresh ones. And they were basically used to make kuru dolma, stuffed dried veggies and cooked together.

Today, stuffed dried eggplants and peppers have become very popular as a special food to serve at occasions. They are even one of the popular mezze foods served at meyhane restaurants. So they are no longer limited to winter months.

Besides dried eggplants and peppers, we use a mixture of rice and bulgur for the filling. The rest of the filling ingredients are almost the same as our stuffed grape leaves dolma and cabbage rolls, both of which are vegetarian too.

The nutty taste of bulgur wheat matches perfectly with the intense flavor of sun-dried bell peppers and eggplants. We use medium or coarse bulgur, so try to get them. If you want to keep the recipe gluten-free or can’t find bulgur, replace it with rice.

Another ingredient that gives a nice tangy flavor to this filling is pomegranate molasses. You can find it at Middle Eastern stores. If you can’t find it, use extra lemon juice instead.

As for the tangy and garlicky sauce, we mix olive oil, tomato paste, dried mint, lemon juice and pomegranate molasses. We spread this sauce at the bottom of the pan.

Prepare dried eggplants and peppers: You need to blanch them before stuffing so that they are soft and flexible enough. To do this, Fill a large pot with water and bring it to a boil. Reduce the heat. Drop the eggplants and peppers in it. Blanch them for 3-5 minutes or until they are soft. Use a slotted spoon and transfer them into a strainer. Rinse under cold water.

Filling: In a large bowl, combine all the filling ingredients. You can taste and adjust the spices, salt or tanginess to your taste.

Sauce: In a shallow pan, put olive oil, tomato paste, dried mint, mashed garlic, pomegranate molasses and lemon juice. Give it a stir and spread it at the bottom of the pan. Put it aside.

Stuff the eggplants and peppers and cook:

Place them on the sauce in the pan, packed tightly. Pour 1 and ½ cups hot water and let them cook over medium high heat until it boils. Reduce the heat to the lowest when it starts to boil and cook for 30-40 minutes, until the filling is soft.

What to Serve These With

Like other stuffed vegetables, these are simple served with some homemade yogurt or strained thick yogurt on the side. If you want, you can serve cacik, cucumber yogurt dip instead of plain yogurt.

Where can I find strings of dried eggplants and peppers?

You can look for them at Turkish and Middle Eastern markets or online markets.

How do dried eggplants and peppers taste?

They have a more concentrated flavor than fresh eggplants and peppers. You feel a similar taste of sun-dried tomatoes or smoked spices. When they are stuffed with a tangy, spiced and herbed rice filling, they become incredibly scrumptious. 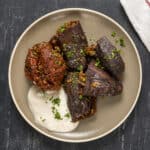 Dried eggplants and red bell peppers stuffed with a mixture of bulgur, herbs and spices.