Do you know how to cook buckwheat groats? It is extremely quick and easy! Cooked buckwheat can be incorporated into a ton of different recipes from salads to soups. Also, it makes a great gluten-free substitute for whole grains like wheat berries, bulgur and barley.

Love side dishes like bulgur pilaf and rice pilaf? Here is another healthy option for you that is gluten-free: Simple cooked buckwheat. Pair it with any main dish you like or make a tasty buckwheat salad with veggies or use it in soups.

Today we will have an in-depth look at this superfood. You will learn how to perfectly cook buckwheat, enrich it with other flavors and incorporate it into different recipes.

Despite the name, buckwheat has no relation to wheat and therefore is completely gluten-free! It is not a grain at all. It is a gluten-free seed with a nutty flavor and also considered a superfood that is packed full of nutrients.

You can use it in summer for salads and stuffed peppers, or in cold winters as part of a soup like tomato chicken soup or a stew. It can even be ground to make buckwheat flour. It is used as a gluten-free flour to make pancakes or brownies!

This buckwheat recipe, which only uses the groats, water, salt, and oil, is also commonly referred to as kasha, a type of porridge that is extremely popular in Eastern Europe.

Buckwheat has become more popular over the past few years in Turkey, especially among people who are suffering from celiac disease. One of the reasons for this is because of its gluten-free and non-allergenic characteristics. It has several health benefits. It is a great source of potassium, dietary fiber and antioxidants and is a great source of vegetarian protein.

We prefer using toasted buckwheat groats for recipes as the flavor and texture is better when cooked. It is easy to find at markets or online, but if you cannot find any, you can easily toast them yourself.

To toast raw groats at home, simply preheat the oven to 320°F (160°C) and add the groats to a lined baking tray. Toast them for about 5 minutes or until they start to brown. Alternatively, you can toast them in a medium-hot pan until brown.

When choosing between the two fats, we prefer using olive oil mainly because we use our buckwheat in salads. When it comes down to it, it is entirely up to personal preferences.You can even use coconut oil if that’s what you use often in your cooking.

It is best to use a bit of butter when you want to serve it as a side dish like rice or bulgur pilaf.

Making this buckwheat kasha recipe is extremely quick, easy, and delicious! With only a few ingredients you can create a filling and flavorful side dish that will complement any main.

First, cook the buckwheat: Rinse buckwheat under water until it runs clear. Bring a large pot of water and salt to a boil, add the buckwheat, and lower the heat to a simmer. Cook the buckwheat covered over low heat until it becomes tender, about 10-12 minutes. Drain any remaining water and allow it to rest for 15 minutes. We use 1 cup of groats for this.

Second, fluff the buckwheat and serve: Using a fork, gently fluff the cooked buckwheat, but avoid mashing it. Serve immediately as is or make a buckwheat porridge while warm or allow it to cool completely before incorporating it into salads.

What makes this pseudo grain, buckwheat kasha so versatile is that you can make it both sweet and savory.

For a sweeter dish, you can add milk, berries, honey or maple syrup, nuts, or spices like cinnamon. This makes a perfect buckwheat breakfast bowl.

For a more savory flavor profile, combine buckwheat with yogurt, some citrus juice like lemon or lime, and a variety of spices like toasted cumin, fennel, or coriander.

If you want to make it even more savory, try cooking the buckwheat in chicken, beef, or vegetable stock and use chicken or beef fat instead of butter. This creates an amazing umami flavor profile!

Do I need to soak buckwheat before cooking?

When making any buckwheat groats recipe, you don't have to pre-soak them, however, it does reduce the cooking time drastically. To pre-soak buckwheat, soak the groats in water for 6 hours or even overnight. Give them a good rinse before cooking them for 3-5 minutes.

How long to cook buckwheat groats?

If you follow the instructions, your buckwheat should be perfectly cooked in 10 minutes. The groats should be tender, not mushy.
If you find that they haven’t yet fully cooked in the 10 minutes, continue cooking for another minute or two until they are done.

How to cook buckwheat so it doesn’t go mushy?

The best way to prevent mushy buckwheat is to prevent over-cooking it. That is why we highly recommend checking and testing the wheat after 10 minutes to see if it has been fully cooked.
Another handy tip is to not overwork the cooked buckwheat when you are fluffing it. Gently scrape your fork over the rested buckwheat.

How much water do I need to cook buckwheat?

For every cup of buckwheat, you can use 1 ½ cups of cold water. So for 2 cups buckwheat, you would need 3 cups water. If you see that the water is evaporating too quickly, you can add another ½ cup boiling hot water to the pot.

How do you store cooked buckwheat?

After your cooked buckwheat has completely cooled, place it in an airtight container. Store it in the refrigerator for up to 4 days. Alternatively, you can freeze the cooked buckwheat for 3 months.

How To Cook Buckwheat Groats 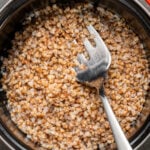 The basic way of how to cook buckwheat groats in a pot.