Potato Phyllo Pie is not only easy and simple but it is also tasty and filling. Forget about traditional pies, this savory and flavorsome potato pie makes a perfect potluck food too. 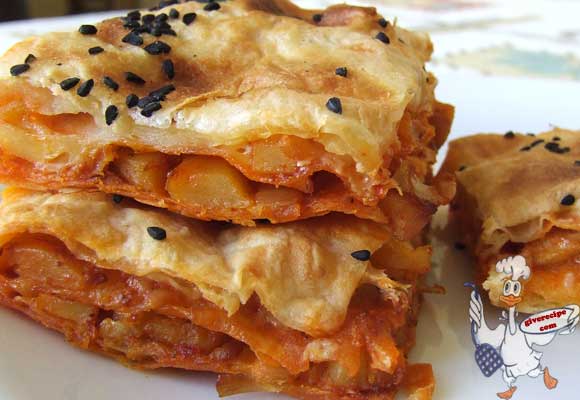 Potato Phyllo Pie is just another type of Turkish borek. It is one of my favorite Turkish recipes and one of the most common pastries served to guests here. I generally make borek at the weekend as a preparation for week days. As I leave for work early in the morning, borek becomes my best breakfast. You know how much I love breakfast. During weekdays, I don’t have enough time for a big breakfast though. If we have prepared borek in the refrigerator, I just heat them in oven or in a pan on the stove. The best quick breakfast for me!

Moreover, if I have something different for breakfast, I put a few potato phyllo pie squares in my lunch bag and take it to work. It becomes a perfect lunch accompanied by a glass of ayran as borek is also eaten cold. When I take some for lunch, I always take more than I can eat because I love sharing lunch with my colleagues. 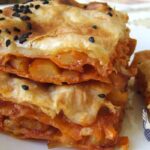 Potato Phyllo Pie is easy to make yet it is one of the yummiest savory pies.

To stick these phyllo sheets