Can you fit freshness, nutrients, crunch, cream, spice, flavor and health all in one salad? If you make this simple Creamy Cucumber Salad, you can! Made with onions, fresh cucumbers, dill and Greek yogurt – right, NOT mayo-, creamy cucumber and onion salad will be your new summer hit! And it is only 10 minutes away! 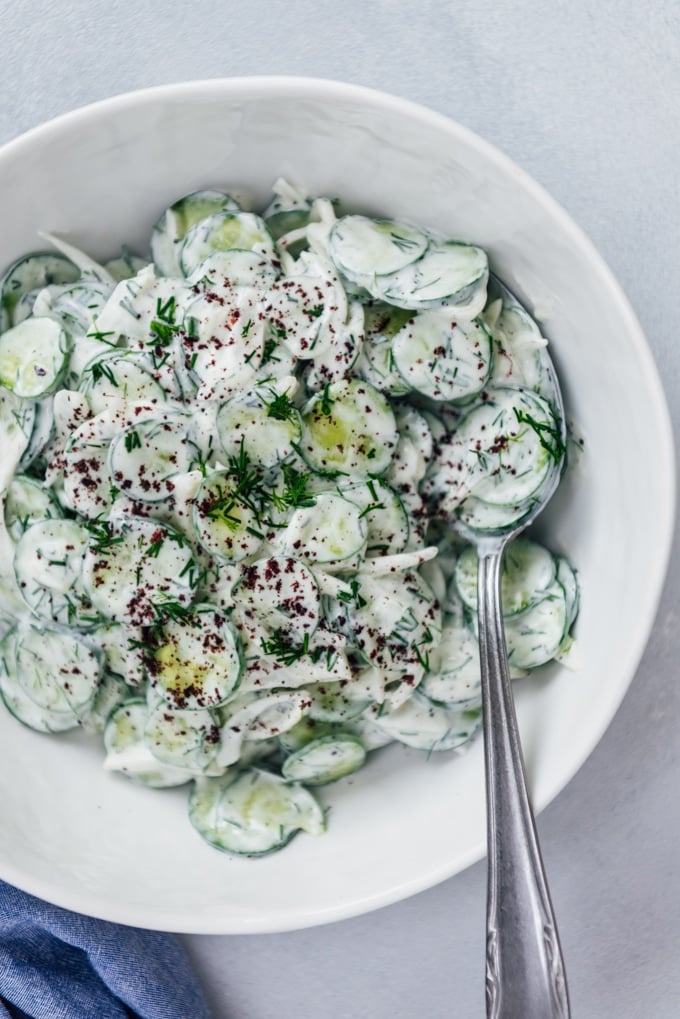 This creamy cucumber salad is one of our favorite side dishes simply because it goes great with a lot of food, especially with any kind of meat. Plus, it is super easy to make.

I made it as a side dish when I posted my One Pan Garlic Lemon Chicken Wings and these creamy cucumbers and onions drew as much attention as the main dish. Several readers asked for the creamy cucumber recipe they saw in the pictures of that post because that was what we served on the side of our amazing chicken. So I had been planning to post this recipe for a long time but I somehow put it off probably because it is such a simple and classic salad.

However, it is getting warmer and warmer now, and what’s needed is a refreshing side dish on the table. Well, what’s lighter and summerier than a fresh cucumber salad?

This creamy cucumber onion salad is so light and simple. It is perfect for potlucks, barbeque, picnics, gatherings or summer grilling. 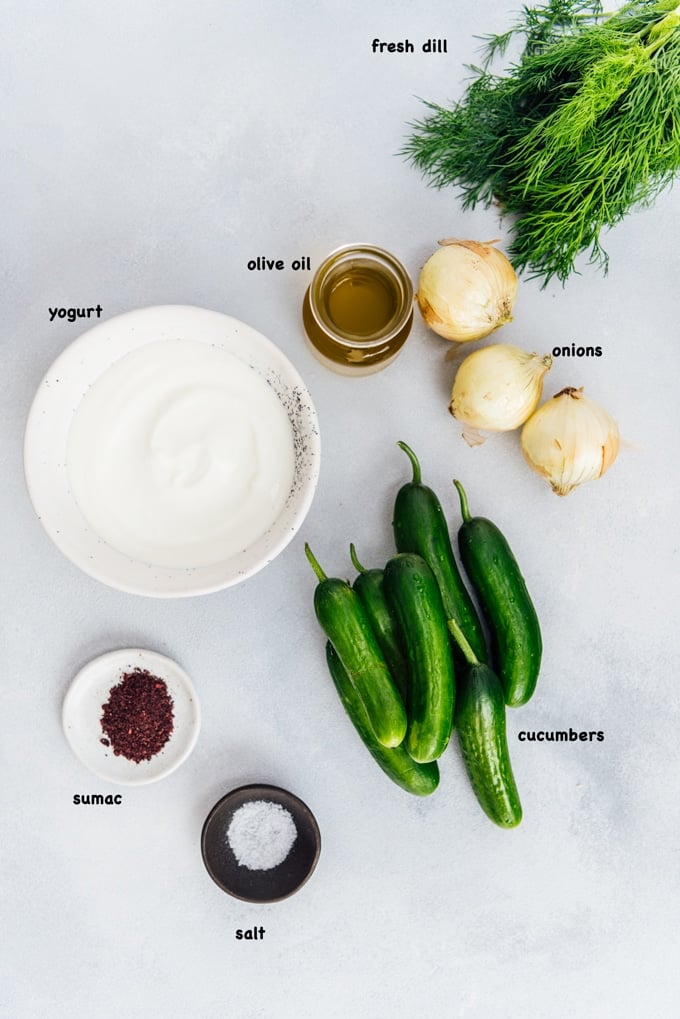 What Goes In Creamy Cucumber and Onion Salad

What is inside this super refreshing salad? It is a simple combination of the following ingredients.

Each ingredient has their part in it. Cucumbers give a fresh crunch and dill offers an exquisite aroma to this creamy cucumber salad. Onions are spicy and crunchy and carries any salad to another level.

The other great ingredient in this salad is sumac. With its earthy and mild lemon flavor, sumac gives a Middle Eastern touch to this delicious creamy cucumber dill salad. But that’s not the only plus about it. It is a wonderful antioxidant – it’s actually stronger many other fruits and vegetables.

Now what’s even greater about this salad is that it has yogurt instead of mayo. In most easy cucumber recipes, sour cream or mayo is added to have a creamy texture. However, cucumber salad with yogurt is a lot lighter but no less tasty. That’s not the only good thing about yogurt which is a staple food in Middle Eastern and Mediterranean kitchen.  Yogurt is also a great source of good bacteria called probiotics, which is good for the digestive system. Plus, it is a very good source of protein and calcium.

What Kind of Onions To Use With Creamy Cucumbers?

Red onions are my favourite in salads as I simple love eating them raw because they have a mild flavor and  they give a nice color to the salad.

When red onion aren’t in season or don’t appear at markets, I use either white onions or small sweet onions as I did in this salad. They are mild in flavor and crispy too, so both are perfect for salads.

On the other hand, I don’t recommend using yellow onions, which are also called brown onions because they have a stronger taste, might even be bitter. That’s why I prefer using them cooked or when making caramelized onions.

Related: How To Caramelize Onions 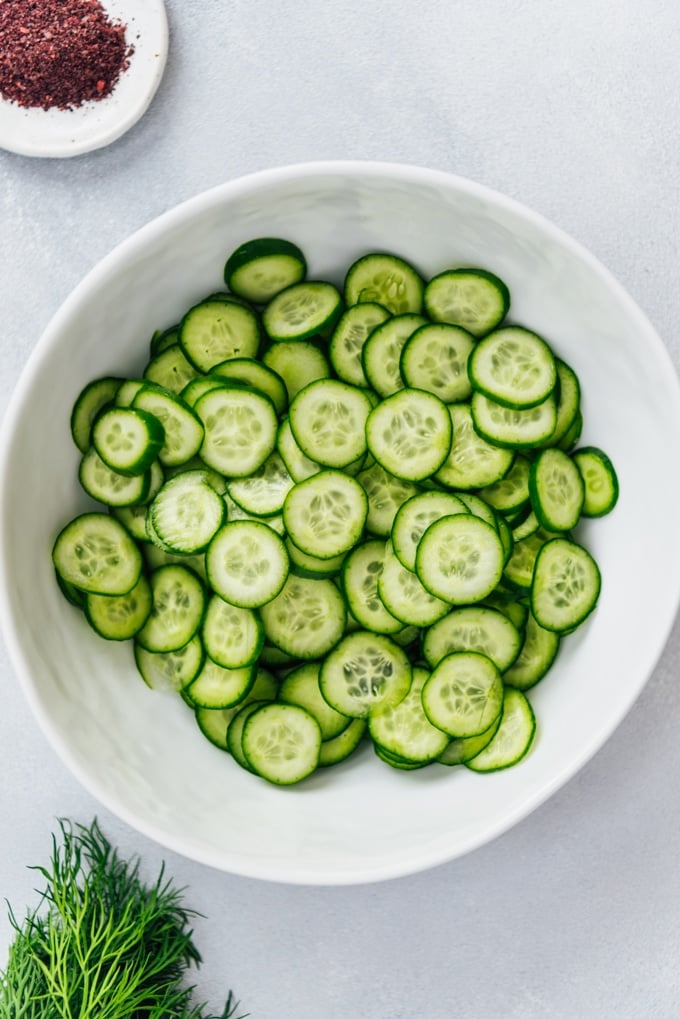 What Kind of Cucumbers for the Best Cucumber Salad?

English cucumbers or Persian cucumbers work best in this recipe as they are tastier and have fewer seeds. If you can’t find these, you can use garden cucumbers too. You might need to peel their skin though if it tastes bitter. So taste it first and then decide to peel or not. Also, garden cucumbers mostly have bigger seeds, so you’d better remove the seeds and then chop for the salad.

It’s not the first time I use Greek yogurt in a salad dressing as a substitute for mayonnaise. One of our favorite summer salads that we have for a light lunch is Greek Yogurt Chicken Salad. We make it with Greek yogurt dressing that is very similar to this one. Also, we make Pasta Salad Without Mayo at dinner parties or potlucks and everyone is pleased with the Greek yogurt dressing in it.

This dressing with Greek yogurt, olive oil, sumac and salt is very light and flavorful. Sumac is a great match for onions. However, you can always play around the recipe.

PRO TIP: If you can’t find sumac or aren’t a fan of its earthy and sour flavor, take it out and add in lemon juice instead. Or you can use a little bit vinegar.

If you do not care about the calories, you can add mayo or sour cream instead of yogurt. Or you can add a little bit mayo in the yogurt, which will still have less calories than full mayo as we do in our Low Carb Chicken Salad. This dressing is totally open to experiments. 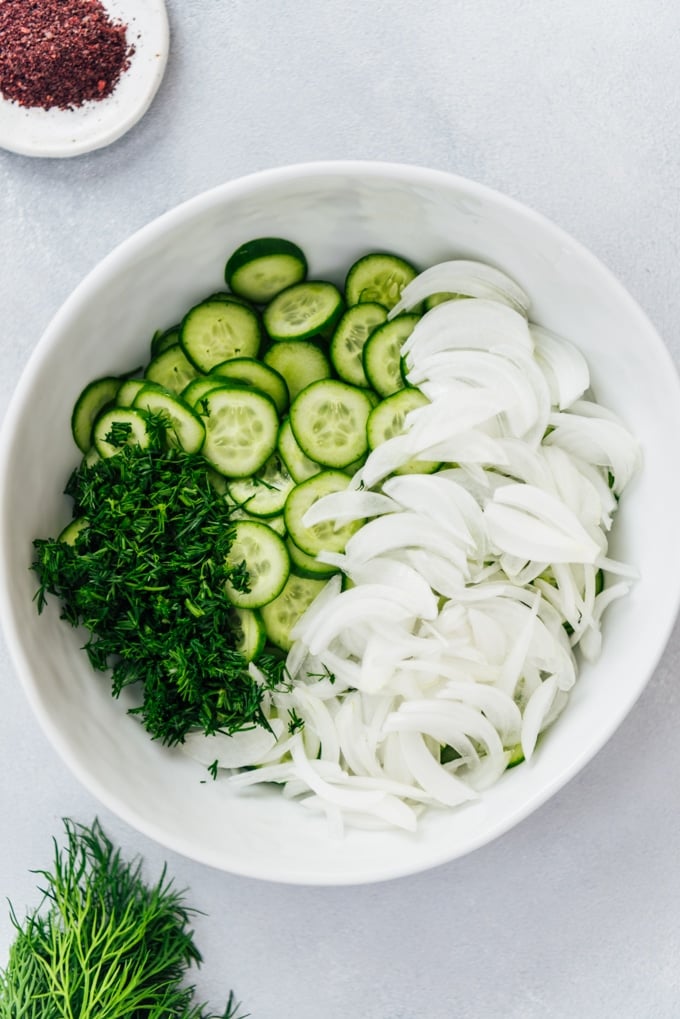 How Do You Make Cucumber Salad Creamy?

This creamy cucumber and onion salad is incredibly easy with two steps. You just need 10 minutes.

First, slice cucumbers and onions thinly. Put these in a bowl and add in chopped dill.

Second, prepare the delicious creamy dressing. Super simple. Just combine Greek yogurt, olive oil, sumac and salt in a small bowl. Whisk until it gets creamy. Pour the dressing over the salad and stir. Your super fresh salad is ready.

This salad is like an improved version of our classic Yogurt and Cucumber Dip (Turkish Cacik) with a few extra ingredients. If you want to go even simpler, go check it out!

These two are the staple side dishes in our kitchen when serving chicken or meat. On the other hand, when we crave for a tangier salad, we definitely use an oil and vinegar salad dressing and make a cucumber tomato onion salad, which we call Turkish Shepherd Salad. 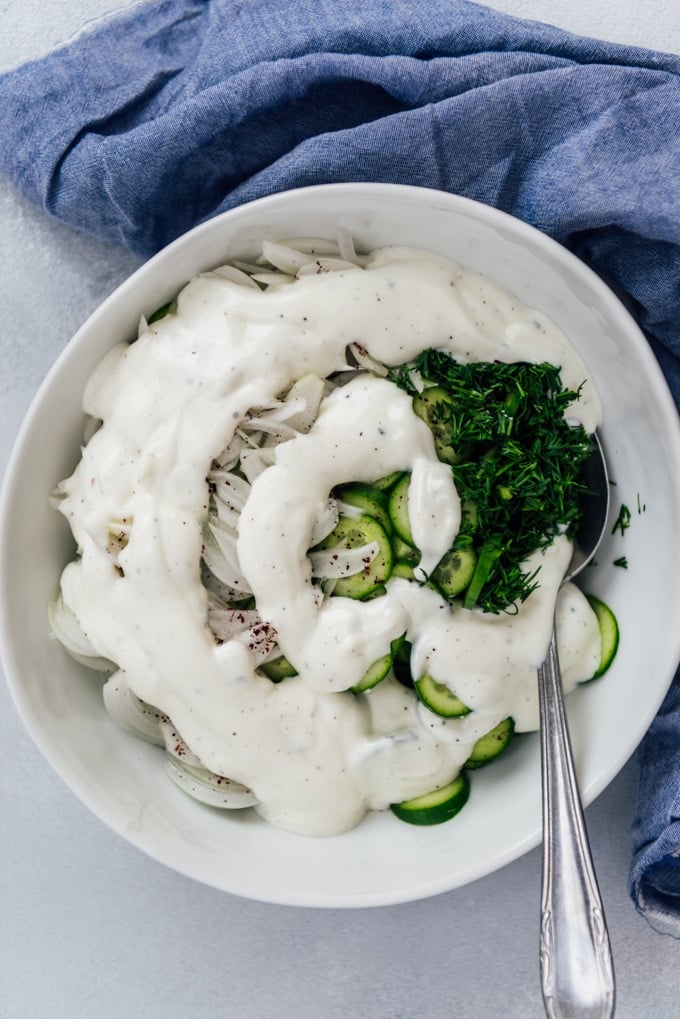 How Long Does This Creamy Cucumber Dill Salad Last

It can last a couple of days in the fridge. However, I do not really recommend this because the cucumbers will get watery and the taste of onions will change. So you will not enjoy it as much as the fresh one.

More Ideas On What To Do With Cucumbers

For me, there is never a concern about what to do with cucumbers. Almost with no calories, I can snack on these crunchy fresh vegetables as often as I want. So, I use them in many recipes. They work great in salads, side dishes and sandwiches. They are so good and refreshing especially in warm weathers. Want more cucumber recipes? Here are some delicious recipes for you:

Mexican Cucumbers With Chile And Lime

Not So Dumb Salad Recipe With Cucumbers 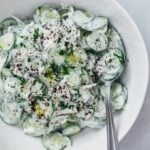 Creamy cucumbers and onions wth dill and Greek yogurt. Super refreshing and crispy. Perfect side dish to accompany any chicken or meat dishes.