We do love savory pastries in Turkey. There are several savory Turkish foods that can be served as a treat at tea time. Sigara böreği, gözleme and spinach and cheese borek are among the most popular ones.

Borek is one of the most loved Turkish dishes. It is the general name in Turkish cuisine we use for savory pastries made with phyllo sheets and various fillings such as cheese, meat, chicken, potatoes, spinach or eggplants. Sky is the limit when making borek fillings. This Sigara Borek is just another Turkish borek recipe. If you love the idea of borek, you should see our su borek recipe too!

Unlike our Turkish borek with cheese and herbs, which is layered and then baked, this one is rolled-up and fried in a pan on the stove. These cheese rolls are called “sigara böreği” in Turkish which literally means cigarette borek. Well, I have no idea why we don’t call them cigars, they look more like cigars. Don’t you think so?

Turkish phyllo cigars are one of the most common mezes or appetizers served in a restaurant before a main dish arrives. They are also quite popular at Turkish households as a snack to go with delicious black Turkish tea or beer.

As for the phyllo sheets, we use traditional one here that is called yufka. You can use your regular phyllo sheets than you can find at the market. Just make sure to cover them with a damp kitchen towel to prevent them from drying when you are working with one of them.

I resort to this Turkish cheese rolls or cigarette borek recipe quite often since it caters us in many occasions. They make an easy and tasty appetizers, especially when served with Yogurt Cucumber Dip Cacik. It makes a fresh and healthy company to the rolls at lunch too. Sometimes we even have them as a delicious breakfast treat.

My son loves them, too so I often make some for him as a healthy after school snack to munch on. And they work perfectly as crunchy finger food when you have a crowd coming over for a party or get together. Everyone gobbles them up before long. They are so irresistible! Take a crunchy bite from your warm sigara borek ( they’re way better when they are served warm) and wash it down with a beer. DE-LI-CI-OUS!

The best part of Turkish cheese rolls is that you can roll up a good batch to freeze while listening to your favorite radio programme.

Can I change the sigara borek filling?

Sure, you can. You can go experimental and play about with the filling to have your own version of this traditional Turkish cigarette borek recipe. You can have fresh dill instead of parsley or little peas and finely grated carrots or/and onions. Just make sure the size of the filling doesn’t hinder the rolling.
If you are one of those folks who HAS To eat meat, try putting chopped salami, sausage or sujuk and cheese on the phyllo triangle and roll them up!

What type of cheese for sigara böreği?

Can I make sigara böreği with puff pastry?

Turkish people traditionally use phyllo pastry for this recipe and fry the rolls in a pan. If you prefer, you can use puff pastry and bake them in oven instead. Of course, the texture and the taste will be different but it can be just another alternative to regular ones.
Or you may still go with the phyllo pastry but bake them in the oven if you want them lighter. This works very well too. If you bake them in the oven, just make sure you brush their top with beaten egg yolk no matter you use phyllo or puffy pastry. 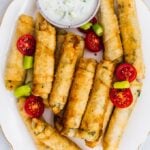