Have I told you before that I’m a teacher? After a long summer holiday, the school finally started yesterday. Although this is my sixth year in this job, I still get as excited as students. I couldn’t sleep well the night beforet as I had series of dreams about my new students. I got up very early, took a shower and had a quick breakfast. I was so curious about my students, so I coulnd’t help thinking continually about them. Would they be passionate enough to learn? Would they be too silent, expecting me to talk the whole class hour? What would they think about me? All these questions were attacking my mind. Although the class started at 9:30, I went to school an hour ago to get motivated and overcome my excitement. Believe or not, I couldn’t get rid of this feeling until I entered the classroom. It was like a feeling of an actress or a singer just before they go on the stage! When you take the first step on the stage (classroom in my case), all questions and negative thoughts go away leaving their place to a wonderful feeling of enjoyment! I understood that I missed those curious looks from a crowd of students. Happily, we had great time and enjoyed the lesson together on this first day. Hope it goes on in the same way until the end of the term.

After school I went to bazaar (farmer’s market) and bought some fresh vegetables from there. It was so crowded as we’re close to winter and we know that in winter it’s hard to see vegetables as fresh and delicious as the ones in Summer and Fall. People were buying more than they usually do. Because of the crowd, I didn’t have much chance to compare the prices. In fact, I got so happy when I saw one of my favorite summer vegetables there that I wanted to do the shopping quickly to go home and cook this tasty ‘green bean like’ vegetable for dinner. I knew that this was the last time to see it at the market before winter. As I wanted to share it with you, I couldn’t pass up this chance!

It is called ‘borulce’ in Turkish. When I look up to dictionary, it says ‘cowpea beans’ for its English meaning. I’m not sure if it’s grown in any other countries. However, when I made a quick search, I saw that there are dishes around the world with its dried version, called black-eyed pea (a very cute name!). We also make dishes from it in Winter, but as we have the chance of buying it fresh in Summer, we use it in different ways. Borulce is a common vegetable of Aegean and Mediterranean regions of Turkey. People in other regions generally learn it from their friends or relatives in these two regions. I’m originally from The South of Turkey (Mediterranean region), but now I’m living in Central Anatolia, where people are not familiar with this tasty vegetable. They may think that it has the same flavor with usual green beans, but they are totally different. Although it’s a member of bean family, it has a more outstanding flavor. Unlike Turkish style green beans, borulce is thin and has a cylinder shape with and acidulous flavor, which makes it an appealing savory food accompanying Turkish raki. I must also say that although people may add meat in a dish of green beans, it's never put in a cowpea bean dish.

There are several ways to cook it, but I wanted to share the most common way in Mediterranean region. Agean region has some different versions and I’m going to tell about them in its next season. 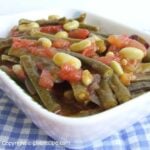