Turkish Apple Cinnamon Cookies are a true classic and packed with fall flavors. These are slightly crispy on the outside and melting in your mouth on the inside. The apple filling gives you the feeling of bite size apple pie.

Apple Cinnamon Cookies are always great sweet treats when paired with Turkish Chai, but they are even better in fall since there are various fresh apples at bazaars in this season. My favorite is always green sourish ones, but these rolls are made with sweet apples, you decide the color. I saw some organic apples at our local bazaar last week and used them in this recipe, you know organic foods have better tastes and these apple cinnamon cookies became divine with that distinctive flavor of apple.

You can find these in many pastry shops in Turkey and they are called elmali kurabiye –cookies stuffed with apples. The shape of them might change though. Some of them are so thin and small, some are thick, some have little filling, some have a generous amount, so you are free to make such changes when you make it at home. The filling is always the same though, a mixture of cinnamon, walnut and apple. This is one of my favorite combinations in sweet treats. The flavor of cinnamon couldn’t go better with another fruit! Plus, walnut gives a nice nutty flavor to this mixture.

The dough of these apple cinnamon cookies is as important as the filling. It must be melting in your mouth, and you can eat as many as you like.I used all purpose flour for this recipe, but I sometimes make it with whole wheat flour and I love the brownish color more. Also, unlike the traditional one, it gets a little crispy that way and I love it too!

Traditional apple cinnamon cookies don’t have lemon zest in the dough, but I love its refreshing flavor in it. I think it complements the combination of flavors in the filling. 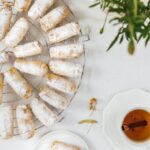 This post was originally published in 2013 and we're updating it today with new pictures and additional info.