Love world-wide popular lahmacun aka Turkish pizza? Flatbread topped with spicy ground meat and veggies? These Mini Lahmacuns are mini versions of it with a much softer crust. They make a perfect appetizer!

This is one of the most popular traditional Turkish fast food. It’s originally from an Eastern city of Turkey, Sanliurfa. Now you can find lahmacun restaurants all around the country and not surprisingly, the owners of almost all these restaurants are from Sanliurfa. And generally they serve lahmacun only, not any other dishes. As people from this small city love hot pepper, the original lahmacun is too hot for the people in the West of Turkey to eat. Then they decided to serve two versions of lahmacun in their restaurants in this part of the country: with and without hot pepper. In these restaurants, there are also red pepper flakes in small bowls on each table. If you aren’t sure whether you can eat hot lahmacun or not, you can order one without pepper and when it comes to table, you can sprinkle red pepper flakes according to your taste.

The shape of lahmacun may change depending on its region. Originally, classic lahmacun is so thin with a crispy texture and as big as a serving plate. It may be either round or oval in shape. However, in the region of Mersin, there is a very small version of lahmacun. It is called fındık lahmacun because of its small size. Findik lahmacun is a term used in other parts of the country to differentiate between two versions. Findik (fındık) means hazelnut and this word is generally used to show how small something is. This lahmacun is as small as a saucer and I find it cuter than the big one. And unlike the big version, findik lahmacun is not crispy as it’s not that thin. I do love both versions, but this small one is more advisable to make at home. You can eat it with a big pleasure even the following day as it’s still soft. However, the big and thin ones are better eaten once they are cooked.

In Mersin (A Southern city of Turkey) and its small towns like Tarsus, there are special bakeries just for cooking lahmacun in stone ovens.  Women prepare the topping mixture at their homes and generally their husbands take the mixture to such a bakery and ask when it will be ready. They come back to take the cooked lahmacuns at the time he is given. He pays the money and leaves a few of them to bakery people. As you see, this is an easy way of making lahmacun, you just prepare the topping and the rest of the work is done for you at bakeries. However, if you’re not living in that part of Turkey, but still want to make findik lahmacun, you’ll find its recipe below. This is again a recipe from mom. I learnt this recipe as a child as we used to make lahmacun together at the weekends.

Serve As An Appetizer

You may find that lahmacun looks like a pizza, but there is a big difference between them. A pizza is sliced and it can be eaten with a knife and fork while you don’t need knife or fork to eat lahmacun. Put some parsley leaves, squeeze lemon, wrap it and it’s ready to eat. Although it is served sliced in some restaurants today, it’s not the right style to eat lahmacun. I think this shows an inevitable effect of some international dishes on local dishes.

How To Make Mini Lahmacuns

We put a few parsley leaves on it, squeeze lemon on it and fold it to eat. 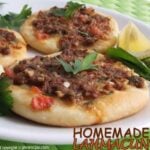