Kadayif is one of the most popular Turkish desserts that is made using only a few ingredients. The kadaif noodles are covered in butter and pistachios, then baked to a golden brown, crispy perfection. It gets finished off with a delicious lemon sugar syrup and served with some traditional kaymak cream.

If you love the world-famous Turkish baklava or tulumba dessert, then you will fall in love with this kadayif dessert too! If you are into this kind of treats, you should check out our best Turkish desserts too!

Kadaif is often confused with Turkish kanafeh because both are made with kadaif noodles. Traditional kadayif doesn’t contain any cheese while it is what makes a kanafeh unique.

Tel Kadayif (Shredded Kadaifi) is one of the most well known Turkish desserts with a sweet syrup. Tel is the word we use in Turkish to describe those tiny shreds. Tel kadayif is like tiny and crunchy noodles made from flour and water. It is enhanced with butter, walnut or pistachio, cooked in oven until golden and then soaked in syrup so that it becomes a soft and sweet treat.

Kadaif is an extremely popular Turkish dessert that uses shredded filo dough. The term not only refers to the shredded noodles, but also the actual dessert. Kadayif dessert is packed with pistachios or walnuts and sweetened with a syrup. Other common and popular terms used for this dessert include Tel Kadayif or kadaif.

The noodles are an extremely thin type of Turkish noodles that are also used to make some other desserts Kanafeh or Greek kataifi rolls.

Our kadaif recipe is also called a sheet pan kadayif because of the method used. The shredded dough is covered with butter, pressed down into a pan, and then baked until crispy.

Another form of this dessert is called kadayif rolls or stuffed kadayif. The ingredients can stay the same, but the shaping method changes. For these, you incorporate the chopped nuts into the mixture and roll them up into cigar-like shapes.

Alternatively, you can stuff kadaif noodles in a coffee cup, turn it upside down to give it a dome shape and bake. We sometimes make it this way, today we will be sharing the traditional way below.

This delicious recipe only consists of two elements and a few basic ingredients. The first is a lemon flavor sugar syrup which will help sweeten the dish and add a ton of moisture to it.

We highly recommend making your own at home rather than buying pre-made syrup. Homemade syrup is fresh and has a far superior flavor! We use this same syrup in several Turkish desserts like revani cake, tulumba dessert or sekerpare.

The next element is the kadayif base. All you need is butter, the kadayif noodles, and lastly, crumbled pistachio.

For the butter, you can make use of either salted or unsalted, but NEVER use margarine for this recipe. It doesn’t have the same texture, baking characteristics, or flavor.

The kadayif noodles can be made at home or bought. You can easily find them in the frozen foods section at your local grocery store, or order them from online Middle Eastern markets.

Lastly, you need pistachios. You can decide how fine you want the texture to be, but we prefer using something between ground and roughly chopped.

This kadayif dessert is extremely easy to make and only needs a few ingredients. What’s even better is that you can make it in less than an hour!

First, prepare the syrup. Place all of the syrup ingredients in a saucepan and bring it to a boil while stirring. Reduce the heat and simmer it for about 15-20 minutes, or until it thickens. Remove it from the heat and let it cool.

Add the raw kadayif noodles on baking paper and shred them into strings.

Pour melted butter onto the noodles and mix it well with your hands to ensure all pieces are coated well.

Spread half of the buttered kadayif in the baking pan, pressing them down tightly with a measuring cup.

Sprinkle the pistachios over the bottom layer, followed by the remaining kadayif mixture.

Again, press the noodles down using a measuring cup. Bake for roughly 30 minutes, or until it is beautiful golden brown.

Third, assemble the kadayif. Once fully baked. Remove it from the oven and slice it into squares. Pour over the cooled syrup and allow it to rest for 3 hours so the syrup absorbs fully.

This pistachio kadaif recipe is extremely easy to pair. Many people serve it as is, however there are also a lot of common accompaniments.

Always sprinkle extra ground pistachios over the baked kadaif before serving it.

Most places serve their kadayif with kaymak, which is a type of clotted cream. If you don’t want to make it or you cannot find some, alternatively you can serve it with ice cream too.

To finish it all off, serve the dish with some traditional Turkish coffee or tea.

All syrup-soaked desserts should be stored at room temperature in an airtight container.

If you keep these in the refrigerator, they run the risk of becoming too hard and losing their crispness. This means that the texture of the whole dessert changes.

We wouldn’t recommend freezing this dessert. Rather make and serve it fresh for the best results! 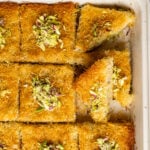 A delightful Turkish dessert made with shredded kadayif dough noodles, syrup and pistachios.