Lokma is another traditional Turkish dessert, but the good news is that it’s not as challenging as baklava. It’s one of the easiest dessert with some very simple ingredients. It’s nothing more than fried sweet dough, but I must warn you that it’s addictive! Since these are bite size, you might not realize how many you eat, these taste so darn good!

Lokma is traditionally made in big amounts and served to large group of people at special occasions like weddings, openings of workplaces, even at funeral ceremonies. It is a common treat especially in the west part of the country and there are special companies in this area making lokma for such occasions. They take big cauldrons to the place they are invited and make lokma right there. It’s not surprising to see people in long queues in front of these cauldrons since lokma is the best when hot.

Besides being a traditional treat at special occasions, lokma has also become one of the best summer treats you might encounter on the beach. I find it weird but we love to eat this hot served lokma even under sun in summer. You start to feel a sudden craving for it right after you stop swimming or when lying on the beach. I still question why it’s not served with ice cream, would definitely be a better option that way in such a boiling weather. Most people wouldn’t agree with me on this, they love it plain and the only additions on lokma you might see are grated coconut or pistachio powder sprinkled over it.

A good lokma is crispy and golden outside and soft and light golden inside. You should hear the noise of crispiness when you bite it. Also, it should be juicy inside, but not doughy. You should keep the following two tips to achieve this. First, the dough shouldn’t be too thick or too runny. It’s a little thicker than a regular cake batter. The next tip is about the frying oil, make sure it’s hot enough before droping the dough balls into it. 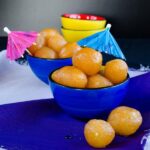 Note: This is the traditional way of making lokma. If it sounds messy and hard, you can just take dough pieces with a teaspoon and drop it into oil. It's still necessary to dip it into oil before taking the dough.