Made with coconut milk instead of cream, this perfect Vegan Cream of Mushroom Soup is the ideal dish to get you excited for fall! Whether you’re making it for friends and family or meal planning your week, it will keep you full and warm without weighing you down. Simple to make too!

As temperatures drop and we prepare ourselves for winter and the upcoming holidays, it’s time to put away the summer produce and focus on warming and hearty soups and stews. It’s easy to default to heavy dishes but cold weather food doesn’t need to be unhealthy or meat-centric, case in point, this Vegan Cream of Mushroom Soup. This recipe uses only a handful of ingredients but packs a ton of flavor. Just like our Vegan Red Lentil Spinach Soup,  this soup is for non-vegans too.

How to Make Vegan Cream of Mushroom Soup

Many soup recipes can take quite some time to cook because it takes time to build flavor, making them difficult to pull off during the week or on a busy weekend. One of our favorite things about this homemade cream of mushroom soup is that it comes together quickly without sacrificing any quality. Plus, you don't need any complicated equipment – just a large pot and a hand blender. If you don’t have a hand blender,  transfer the soup to a regular blender and blitz before pouring it back into the pot.

Starting off with a simple base of onion and garlic, add rice to the pan and toast it for an additional flavor. Mushrooms and a sprinkle of nutmeg then add yet another layer of aroma and seasoning without extending the cooking time.

The addition of coconut milk keeps this a dairy free cream of mushroom soup without losing any creaminess and is, of course, vegan. You can find coconut milk in full fat as well as reduced fat and either can be used here. Regardless of what type you use, make sure to shake the can before opening it to evenly combine the liquids and solids inside. If you like, use half vegetable stock half coconut milk.

As for the topping, I used chopped fresh dill but crispy roasted oyster mushrooms would be a fantastic addition.

Is This a Gluten Free Cream of Mushroom Soup Recipe?

Yes! In addition to being vegan, this is also a gluten free cream of mushroom soup. Rather than using flour to thicken the mixture, the soup is blended, and then toasted and cooked rice helps create the perfect consistency when it’s broken down. Stir in chopped just before the soup is finished cooking and garnish with fresh dill for an extra green touch. If you don’t have spinach, other tender greens can be substituted, and thyme is a great alternative if you’re not a fan of dill.

One big benefit to soups and stews is their ability to be made in big batches and eaten for several meals. This vegan mushroom soup recipe without cream is no exception. Don’t hesitate to double the recipe and eat it all week long. Just make sure you have lots of tupperware handy to portion it out!

Now all that’s left to do is make this Vegan Cream of Mushroom Soup and let us know what you think! Please rate the recipe and leave a comment below! 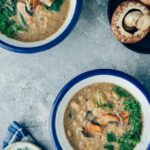 Vegan Cream of Mushroom Soup is super simple and oh-so-yummy! Packed with earthy mushroom flavor, this creamy soup will make you forget about canned cream of soups!

This post was originally published in 2009 and has been updated with additional information.