Fall is the season when apple is abundant. Luckily, it is one of my favorite fruit and I have shared several apple recipes with you. Baked cinnamon apple slices, baked apples stuffed with cinnamon and walnuts and apple cinnamon bars  are just some of them.

This compote recipe is yet another way to use up apples. One of the easiest recipes ever!

Can I Make This Recipe Without Sugar? 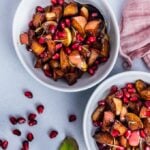