Apple Cinnamon Bread is a not-too-sweet bread that is loaded with apple chunks and flavored with fall spices. Our house smells mesmerizing when it’s baking.

As fall is my favorite season just like many folks around me, I’m trying to fully enjoy it with the help of fall flavors in my kitchen. Although I love to try new soup recipes in this time of the year, testing bread, cake or cookie recipes makes me crazy excited. Who doesn’t like baking on chilly days? Apple and cinnamon make the best combination in the oven. Can you imagine the smell in the house when you bake this apple cinnamon bread? I must warn you that your neighbors will knock your door. Doubling the recipe might be a good idea.

You can use sweet apples like royal gala or fuji. It is not a must but I think sweet apples are better to make this apple cinnamon bread. If you have sour apples on hand, it might be a good idea to increase the amount of sugar a bit.

If you are craving for something based on apple and cinnamon but don’t feel like spending time when making it as in the Turkish Apple Cookies (oh my I can eat them every single day!) I shared on the blog some time ago, give this quick apple cinnamon bread a try. You will love that each slice is packed with chunks of fresh apples.

BTW I must tell you that I have already started to make my plans on a new apple recipe. Wish I had seen Michael’s Spiral Apple Bread on his lovely blog Inspired by Charm before. It looks and sounds amazing! Will give it a try asap and share my thoughts with you. 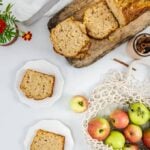 A quick apple bread packed with apple chunks and cinnamon.