This is an incredibly easy vegan pumpkin cinnamon rolls recipe that can even be made in advance. These are wonderfully soft and packed with delicious pumpkin flavor and pumpkin spice that your whole family will love! Perfect for fall mornings! Plus, you can even use this dough to make dinner rolls!

For this recipe, we prefer making our very own homemade pumpkin puree. And if you love pumpkin recipes you should also try out our pumpkin pancakes and our super simple Turkish Pumpkin Dessert with Tahini.

We LOVE this vegan cinnamon roll recipe in the pumpkin season. It will become your favorite too for several reasons even if you are not following a vegan diet.

The filling consists of brown sugar (coconut sugar is a good substitute), pumpkin spice, vegan butter and chopped pecans (or walnuts). If you don't want nuts in your cinnamon rolls, just leave them out.

As for the frosting ingredients, we use vegan butter, pumpkin pie spice, vanilla extract and powdered sugar. If you want you can substitute maple syrup for powdered sugar.

Despite taking some time to make, this is still a very easy cinnamon pumpkin roll recipe. It is completely vegan and nearly every ingredient can be substituted to meet your needs. And, you can even make a ton of different products using this one dough! Let's learn the steps now.

Make the dough: Combine all of the dry ingredients in a large bowl, whisk well. Then add in pumpkin puree, warm milk and softened butter. Mix until they come together. Knead the dough roughly in the bowl for 5 minutes or until it’s smooth and non-sticky.

Grease the bottom and the edges of the bowl with some oil and put the dough sit inside. Cover with some plastic wrap and let the dough rise for at least 1 hour or until it doubles in size.

Make the filling. While the dough is resting, combine dark brown sugar, butter and pumpkin pie spice. Add in chopped pecans and set the paste aside until needed.

Assemble the pumpkin spice rolls. After the first rise, punch down the dough and transfer it to a lightly floured surface. Use a rolling pin and roll the dough into a large rectangle about 5 to 10mm thick. You can sprinkle extra flour on the dough when it gets sticky as you are rolling it out.

Evenly spread the filling with a spoon over the surface, leaving space on the edges. Optionally, you can sprinkle over extra brown sugar and chopped pecans or walnuts.

Tightly roll the dough lengthwise into a log. Use a sharp knife to cut the log into 10-12 rolls.

Arrange the rolls on a lined baking pan, cover them with plastic wrap and allow them to rise again for about 30 minutes.

Bake and serve: Preheat the oven to 350°F (180°C). Bake the rolls inside the oven for 20 minutes or until they are lightly golden brown. Allow them to cool for 15-20 minutes.

Make the frosting. Cream the vegan butter using an electric mixer until it is light and fluffy. Add the powdered sugar, pumpkin spice, and vanilla extract and mix until smooth.

These rolls are best served on the day you baked them while they’re still warm.

You can store them inside airtight containers at room temperature for one day, or inside the fridge for between 2-3 days. When you are ready to serve, reheat in the oven first and then serve.

To freeze these vegan cinnamon rolls with pumpkin, allow them to cool completely. Do not add the icing on top if you know you will be freezing them. Wrap the rolls in a baking pan and place them inside freezer-safe bags or an airtight container. Defrost them inside the refrigerator or at room temperature before reheating them.

Can I make these without yeast?

Yes, you can. Substitute the yeast with 1 tablespoon baking powder and ½ tablespoon apple cider vinegar.

Can I make these with gluten-free flour?

Yes, you can, but add some xanthan gum. You can have a look at this easy gluten free cinnamon roll recipe.

Can I use coconut oil to make these?

Yes, you can use coconut oil instead of vegan butter in this recipe.

Can I use almond flour?

We have never tried it but almond flour might not work for this recipe because it is too coarse. Only powdered flours will work to make a smooth dough that is light and will rise easily. 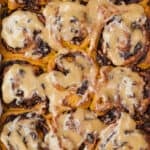 Super fluffy pumpkin cinnamon rolls that are made with vegan ingredients. These are filled with pumpkin pie spice and pecans and served with a yummy vanilla pumpkin spice frosting.