Turkish Apple Tea flavored with lemon zest and cinnamon makes a great hot drink for cold days in winter. Serve it at breakfast or in the afternoon to get warmed.

It was a typical Sunday afternoon for two of us until I realized a bag of dried apple in the refrigerator –right, I wasn’t aware of it for a long time! Until this afternoon when I was checking what we had in it. There couldn’t be a better time to make apple tea using them.

As it is already cold outside, I thought it would be better to make a dried fruit tea indeed, based on dried apple. We had it in the afternoon accompanied by savory biscuits. Instead of having our regular black Turkish tea, we made this apple cinnamon tea.

HOW TO MAKE APPLE CINNAMON TEA

It is a super easy recipe with two steps:

First, put everything except lemon zest in a saucepan. Bring it to boil and let it simmer for 15 minutes.

Second, share it into cups and garnish with lemon zest.

We decorated our dried apple compote with a stick of cinnamon stick and lemon zest.

Pro Tip: We don’t strain it because we love to eat those cooked apple pieces. So make sure you place a teaspoon on the side if you do the same. Or you can just strain it when serving.

This apple tea is sugar free as we thought the sweetness of apple would be enough. And we loved it this way, but you can add a few tablespoons of sugar or honey if you like it sweeter.

You can store the rest of it in refrigerator for a few days. Just heat it when you crave for a heartwarming and aromatic drink on these cold days. 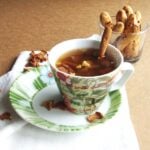 Turkish apple tea made with dried apple, flavored with, cinnamon and lemon zest.