Turkish Salep is a hot creamy drink that warms you up in winter. It is made with milk, sugar and salep powder and topped with cinnamon. It is everyone's all time favorite hot milk drink on a cold winter day in Turkey.

Just like Turkish coffee, salep is a very popular hot drink in Turkey. It is one of the most fascinating drinks around the world. So rich, creamy and milky that both kids and adults LOVE it like crazy! It is served with cinnamon powder on the top. And everyone loves it at first sip.

When we are out on cold days of winter, we love to have either Turkish Boza Drink (a pudding-like Turkish drink made from fermented grains) or salep. Although boza is not served hot, it's a winter treat too. On the other hand, salep warms both your body and your heart. You just fall in love with its aromatic and floral scent.

The unique flavor and creamy texture of salep drink come from salep powder. It is a rare and precious ingredient, so let's learn more about it before making this hot milk drink recipe.

What Is Salep Powder?

You might be surprised but salep powder is produced from the bulbs of some species of orchid family. You know that beautiful and fragile flower, right? Have you ever thought that it has other uses in addition to its majestic beauty?

Wild orchids which are suitable for salep production are grown in the area of Kahramanmaraş, in the south east of Turkey. These orchids have a unique structure. Their root consists of two bulbs side by side. They are shaped like an egg. The bigger bulb feeds the flower while the smaller one works as the spare bulb which will take the responsibility of feeding the flower the following year.

Although salep can be produced from both bulbs, producers pick just the spare ones not to cause the flower to become extinct. When the spare one is picked, the bigger bulb starts to generate a new small bulb. The flower survives this way. Fascinating, isn't it?

After the orchid tubers (bulbs) are picked, they are washed and boiled in water or milk. Then they are dried in the open air. The bulbs are pounded when they are totally dried. As a result, you have the most amazing ingredient in the world: Salep powder or salep flour.

This powder coming from orchid bulbs naturally includes starch and mucilage, which has a sticky characteristic. These together help the milk get thicker while making this Turkish hot milk drink, which is also known as the same name, salep.

Pure salep powder is not only used in this hot milk cinnamon drink, but it is also used in unique Turkish strechy ice cream dondurma.

How & Where To Buy

You can find it at any spice shop in Turkey. Come visit Turkey to find genuine sahlep powder! Outside Turkey, you can search for it at Middle Eastern markets. Also, it might be found in online shops selling products from Greece and Egypt.

But it might be a real challenge to find authentic salep powder due to its high price. It is a bit expensive and that's how you can understand that it’s genuine. If a kilo of it is cheaper than 2000 Turkish Lira/ $115 (in the year 2022), it’s not genuine.

But don’t worry, you don’t need to buy a kilo. Just 10-20 grams will be enough for you because you’ll use just 1 tablespoon of salep to make this cinnamon and hot milk drink recipe.

What Is Salep Drink?

It is a comforting drink made with milk, sugar and ground orchid tubers known as salep powder. It is always served with cinnamon powder on the top. This creamy and rich drink is called salep or sahlep in Turkey and known as sahlab in the Eastern Mediterranean. It is also popular in Greece, Syria, Israel, Lebanon and Bulgaria.

Salep has been a part of Turkish culture since the 8th century, when most of Turks started to accept Islam as their religion. As alcohol is banned in this religion, they were in search of alternative drinks to keep them warm during winter. This is how salep became popular in Turkish culture.

Authentic salep recipe has to be made with pure salep powder. It is the ingredient that gives this hot milk drink the creamy texture. In Turkey, there are street vendors selling sahlep during winter months and the same vendors sell Turkish ice cream in summer.

It is easy to make at home, but takes time. So Turks often prefer enjoying sahlep drink at cafes or buying it from vendors on the street.

On the other hand, although the taste is not too bad, you should know that this instant version is not the real thing. The amount of salep powder in the sachets is too little and it has a mixture of other types of thickeners like cornstarch (or cornflour), glutinous rice flour and milk powder.

Besides its yummy taste and magical scent, this unique drink also has several benefits to health. The most well known benefit of it is that it has a curative effect on cough, bronchitis and cold. That’s why it’s mostly consumed in winter. In addition, it is said that it cures constipation and strengthens heart and mental powers.

How do you drink salep?

As it is a hot drink, be careful and make sure it is not piping hot. It is always served with cinnamon powder on it. You can drink it in the same way you drink hot chocolate. You can stir it with a dessert spoon between a few sips and even have a spoonful of it.

It is not an illegal product. The population of wild orchids has declined in Turkey, so it is banned to export the powder of orchid tubers out of the country.

How do you make Nestle salep?

As it is an instant salep, no need to cook it. Pour a sachet of Nestle salep in a mug. Pour hot milk over it and give it a good stir until the powder dissolves. Sprinkle a little cinnamon on it and enjoy. 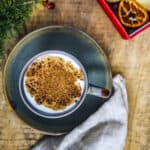 A creamy hot milk drink with an amazing flavor that is wonderfully soothing. It is made with salep powder, sugar and milk.