While shopping in our local bazaar last week, I saw a woman selling some traditional soup ingredients on a very small stand in front of her. You may wonder what I mean with soup ingredients. Hee, women prepare some soup ingredients and keep them for Winter. They are like the healthy and delicious version of industrially-made soups. Some of these ingredients were varieties of noodle like dough pieces; some of them are in strips, some are in tiny squares. In addition, there were also the varieties of tarhana, which is a sun dried soup ingredient mainly containing several grounded vegetables and yogurt. All these were in plastic bags of 1 kg. You know I love talking to such ladies in bazaar, I assume that they know a lot of things about cooking, so I never miss the chance of talking to them in bazaar. That lady didn’t look like a usual bazaar seller, she was different as she wasn’t calling customers, she was just sitting behind her small stand and waiting for foodies interested in traditional soups. She said that she herself made all these soup ingredients, which means a plus for me. These ingredients are all unique as ou can’t find them at supermarkets. They don’t have a company product version, so such ladies are like great treasures if you don’t have time to prepare the ingredients yourself. Among all the ingredients on her stand, these teeny weeny squares took my attention. They were just like the ones mom used to make. It was surprising for me to see it in the bazaar miles away from my hometown. The lady’s recipe for this soup was different from mom’s, but I prefered to make it in mom’s style as I was sure it would take me to my childhood.

When she was younger, mom used to make our own bread like phyllo sheets and they would meet our monthly bread need. We wouldn’t buy bread loaves then. And whenever there was some piece of dough left, she would make these tiny squares from it. I mean she wouldn’t prepare the dough just for making the squares, but made these just after finishing rolling the phyllo sheets. The soup made of these squares are called Tutmac Soup or Kesme Soup.

The procedure to make these tutmac squares is almost the same with Turkish manti dough, so you can check the recipe for the dough in that recipe. The only difference is that you will cut the squares even smaller and you will not stuff them with anything. After cutting them, dry them in a preheated oven over 170C for about 15-20 minutes. Then put them in jars and you can keep them for months. Whenever you want to make a traditional soup for your guests, you can make tutmac soup with these squares. 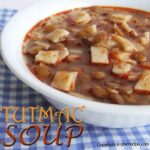