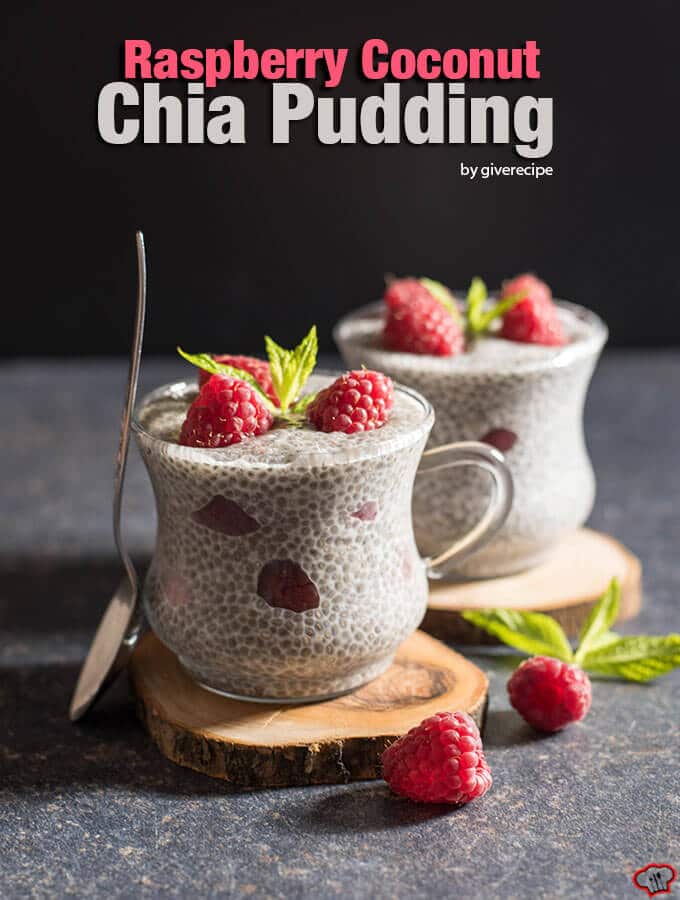 Raspberry Coconut Chia Pudding is the first thing I’ve made with chia seeds. I must admit that it’s the weirdest food I’ve tried so far. It’s not known much in my country and I had no idea what to make with it. The only thing I knew was that chia seed is full of nutrients, so it must be included in our diet. So I decided to start with a basic chia recipe and ended up with this incredibly yummy no bake pudding. Have you tried these magical seeds yet? You’re missing a lot if you haven’t.

It was kind of a challenge for us to taste it when the pudding was ready. Well, the texture of the pudding was not something even close to what we had expected. There was almost no coconut milk left, the chia seeds absorbed all of it and expanded like crazy. The pudding was jiggling just like other ‘normal’ puddings, but the thing was about the texture of the seeds. I don’t know how to describe well because I don’t want you to get a negative feeling but if it will be the first time, you should be ready for the result. 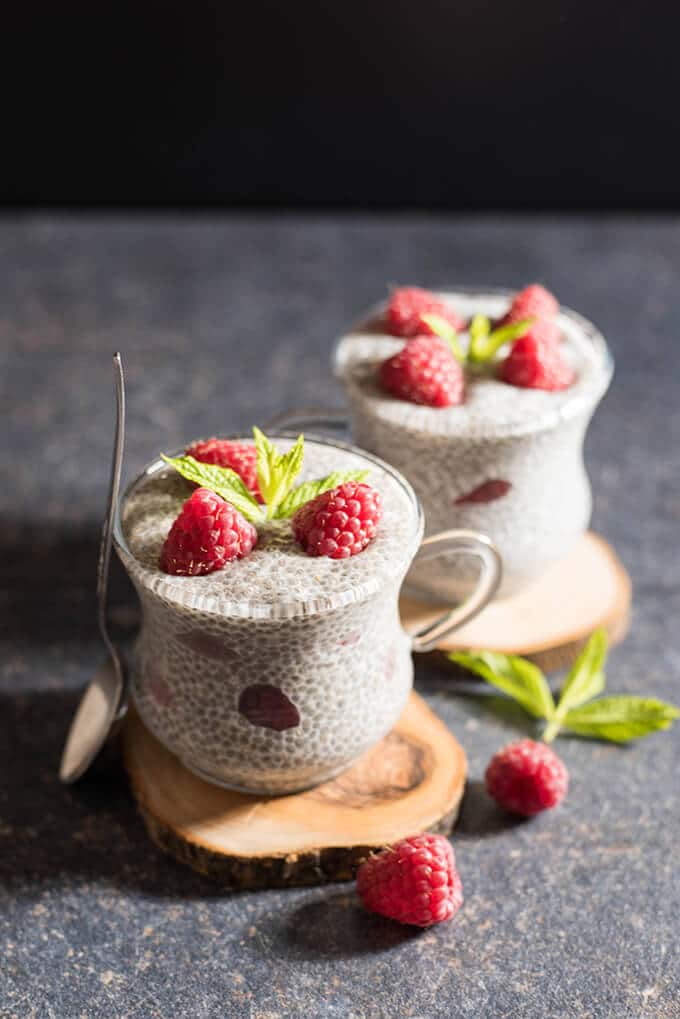 My first reaction when I saw the expanded chia seeds in the jar: “These look like a kind of tiny organism!”

You can imagine how it was hard to have the first spoon of pudding for us. To make it look more edible, we needed to add in something attractive like these berries. Okay Raspberry Coconut Chia Pudding looks much better, doesn’t it? All kinds of pudding are always appealing to me especially in summer. I don’t know anyone to refuse a very well chilled aromatic Turkish Rice Pudding or Saffron Rice Pudding, which is a wonderful vegan dessert. So how challenging could it be? Yusuf was the first to taste the pudding though and he opened his eyes larger with joy. He didn’t even hesitate to get the second and the third and then the whole cup! 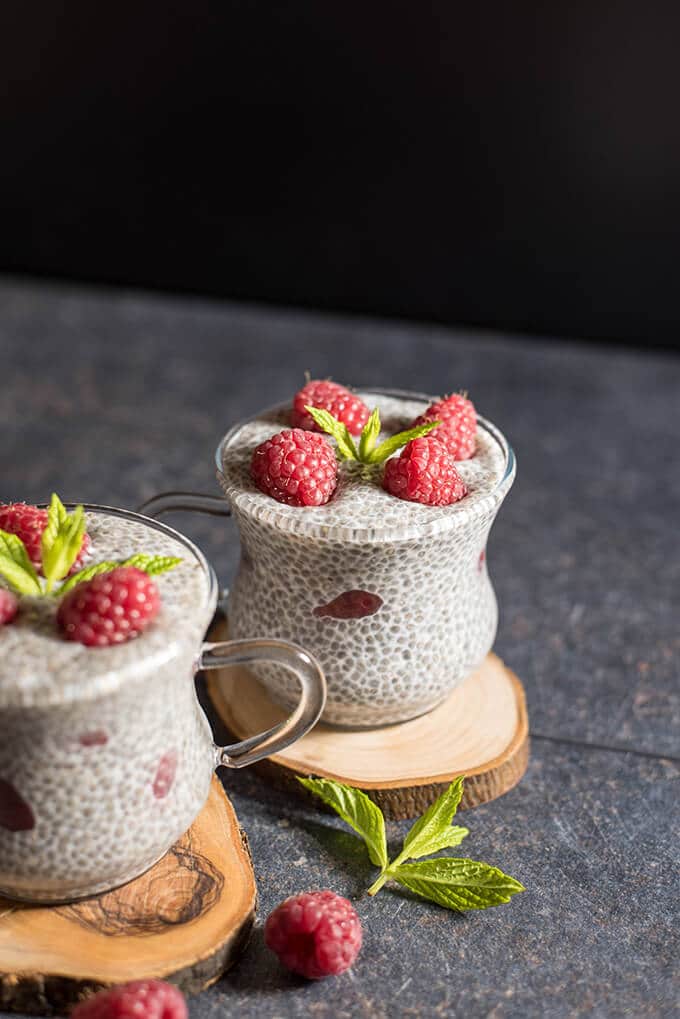 Well, I waited until the shooting process ended and then took a deep breath before dipping my spoon into this raspberry coconut chia pudding. I closed my eyes too and put a spoonful of it into my mouth. “Wow! It tastes AMAZING!” was my final reaction. And just finished the whole cup in amazement. To tell you the truth, I wasn’t expecting that yumminess from that strange looking pudding. I had already started to brainstorm new combinations by the time I reached the end of the cup. This raspberry coconut chia pudding is a big success and I’ll be trying new recipes with these fantastic seeds soon. 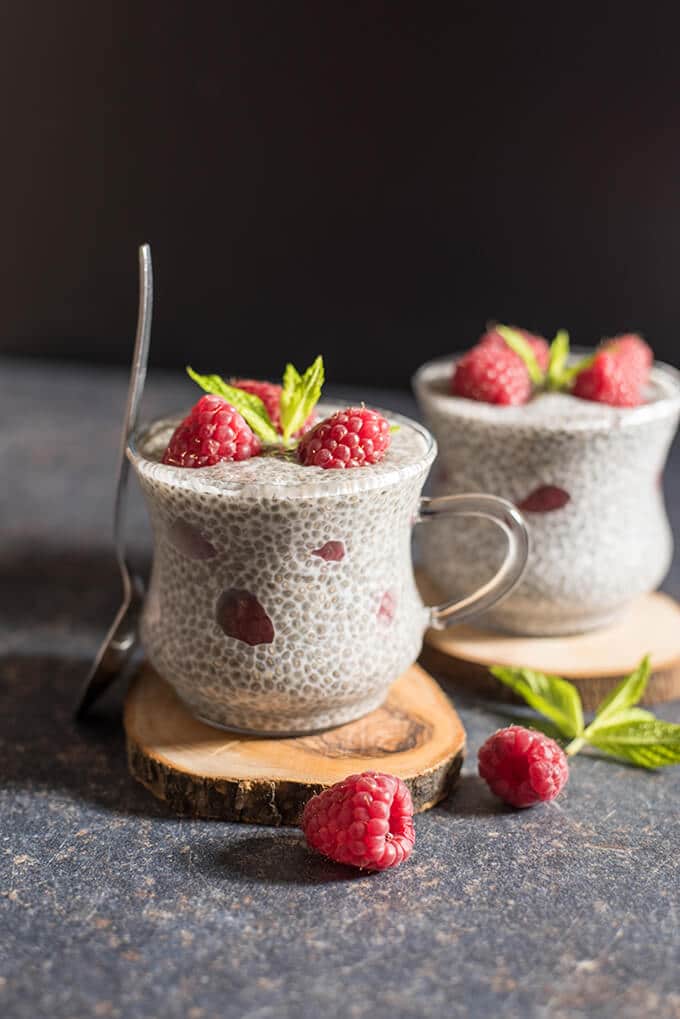 My first reason for trying chia seeds was our son. Göktürk has been following a dairy-free and egg-free diet for some months and I’ve been trying new recipes with new ingredients for him. I learnt that chia seeds are quite nutritious, containing omega 3, protein and calcium- even more than cow milk. So it was a must to try food for me so that Göktürk could get benefits from all these.

We two are hooked now by these amazing seeds! The best thing I love about this raspberry coconut chia pudding is its easiness. This is one of the best no-cook/no-bake desserts. But unfortunately our 2-year-old asked what it was and then refused even to taste the pudding. “Mommy, take this away!” was his first reaction with a strange look on his face. He didn’t even want to touch it!

Göktürk has never been a pudding lover. I’ve tried it several times either plain or with various fruit or nuts, but just doesn’t like it. He doesn’t want to eat pureed things like smoothie or milkshake, either. He rather likes to see and hold the things inside what he eats. So this was another failure for me. I’m never a discouraged mom, so I’ll be trying new chia seed recipes different from pudding and I’m sure I’ll find a good one for my little gourmet. I’d love to hear if you have any suggestions for dairy-free and egg-free chia recipes different from puddings or smoothies.

Here are the recipes I’m planning to try for Göktürk, making changes in some of them so that they are okay for his diet.

Quinoa Salad with Feta and Chia Seeds from Fifteen Spatulas

The easiest yet healthiest pudding ever! Chia seeds make the magic in this amazingly yummy pudding.