Tomorrow is the first day of Ramadan, the fasting month for muslims. Suhoor and iftar are the two meals muslims have in this month. You can read more about Ramadan in my previous posts by using the search box in the sidebar on the right of the page. Desserts traditionally take a great role in this months for muslims, it’s like a reward for the day they fast and they generally have something sweet following iftar meal. The two traditional Ramadan desserts are Gullac, which is a very light dairy dessert made with a special phyllo sheets and Zerde, which is a saffron rice pudding. These desserts are favorite ones for most people especially when Ramadan is in Summer since they are so light and served cold while other desserts like baklava and kadayif are preferred when it is in winter.

Desserts had a significant role in Ottoman cuisine and there were so many kinds of desserts in it. Sugar was so expensive and people couldn’t afford it, so desserts are the symbols of richness and wealth. There was always something sweet at special occasions held by the palace and they were made in very large amounts and served to the poor. This saffron rice pudding was just one of these treats.

What Is Zerde Saffron Rice Pudding?

Zerde is a rice pudding flavored and colored with saffron, which is a quite pricy spice from Middle East. The root of this word Zerd is originally from Persian language and means yellow, so this rice pudding obviously takes its name from its bright yellow color. Saffron is the main ingredient for this pudding, but it could be replaced by turmeric when you can’t find it. Turmeric is used as an additional spice in some regions to make the color brighter.

Another great ingredient in this Persian saffron pudding which complements the flavor of saffron is rose water. It’s like a staple ingredient for several dishes in Ottoman cuisine. I don’t like it when it is used excessively, but I like to feel its subtle flavor when used in small amounts.

So I thought saffron rice pudding would be a good treat to share with you just before Ramadan starts. I wish all muslims have a nice fast month! 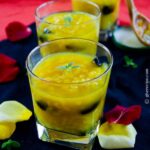 A light rice pudding flavored and colored with saffron.