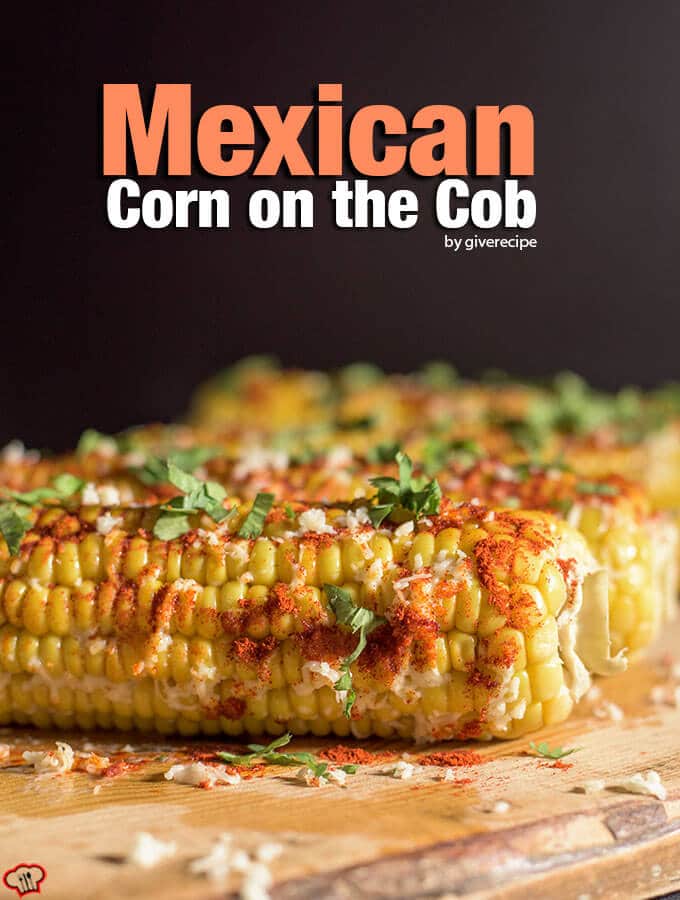 Mexican Corn on the Cob doesn’t need many words to describe. One can easily understand that it is the yummiest snack around the world in summer. The sweet, salty, tangy and hot flavors are all very well combined to make this ridiculously simple yet fabulously tasty Mexican street food known as elote. Although the weather here is still not much summery, people are pretending that it is hot enough to wear short pants or to eat ice cream. Are you having the same silly weather in your area? It’s obvious that we want summer back! Since corn is one of the great summer food, this recipe will help you find yourself in summer. 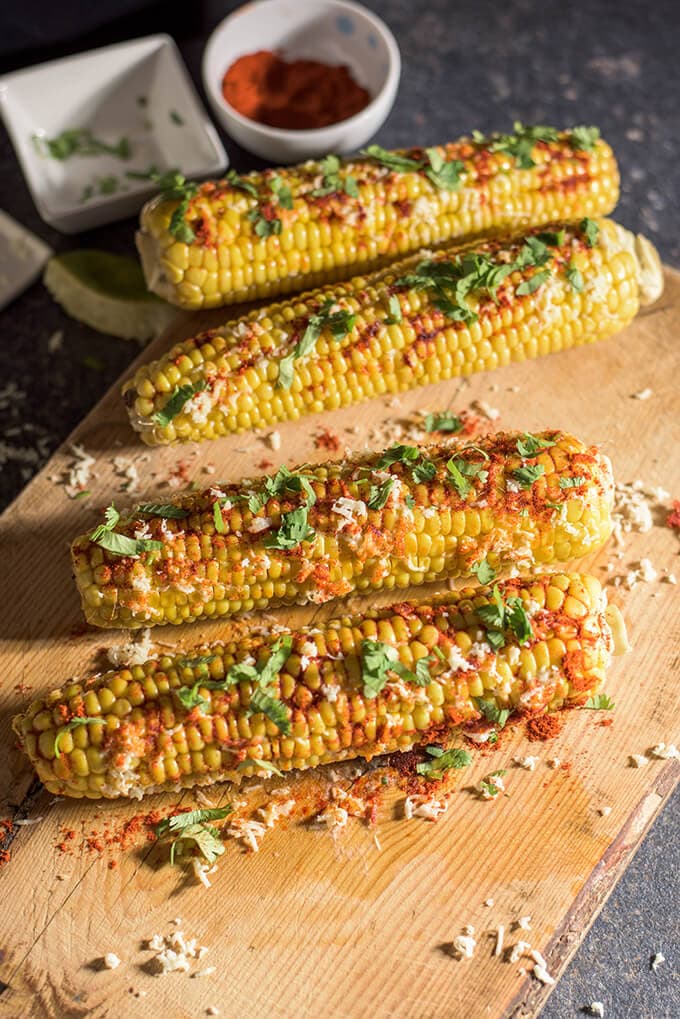 Corn on the cob is a very popular street food in Turkey in summer too, but it’s too plain when compared to the Mexican versions. Vendors sell either grilled or steamed corn on the cob with an addition of salt only, which is good enough. I used to think that corn didn’t need any additions to become tasty. Until I tried this Mexican corn on the cob, which is packed with some very tempting flavors. I first saw the fantastic pictures of Mexican Street Corn recipe on Seeded at the Table and I was just hooked by the idea thanks to the amazing pictures. We were so impressed when we first tried their recipe with some changes. How come we didn’t make corn that way for years? These are much tastier than the plain Turkish ones. Maybe I should share the recipe with the vendors in the city and make everyone taste this heavenly summer treat. 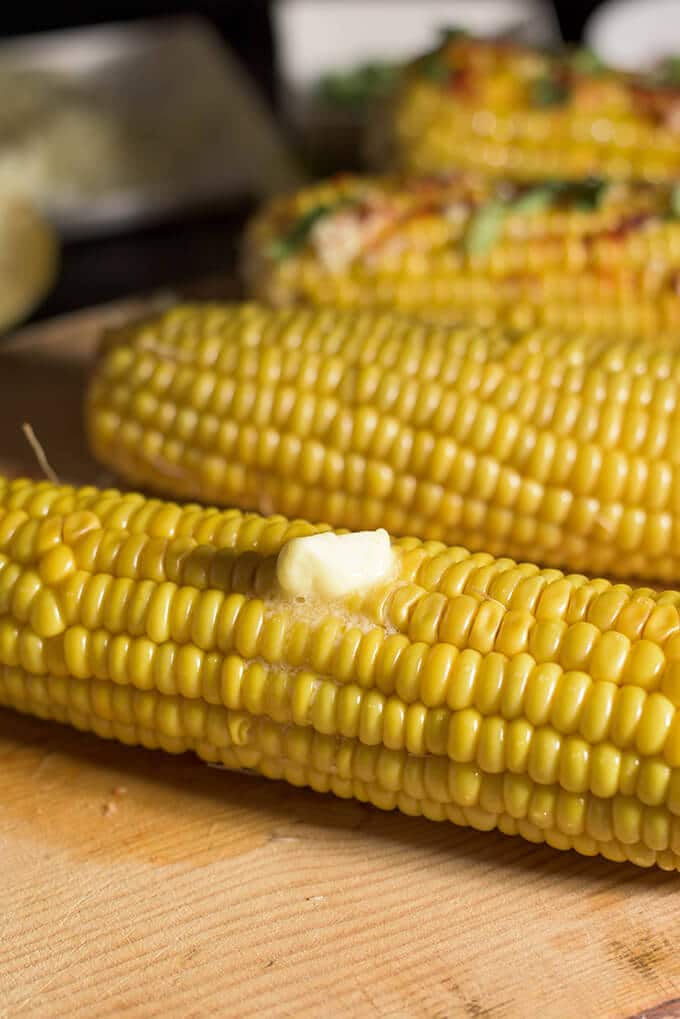 So what did I change in the recipe? The original recipe calls for mayonnaise and sour cream, but I used butter because I don’t like mayo and I think butter is the best pair for corn. Also, originally corn is slathered in cotija cheese, which is a Mexican cheese but I replaced it with grated parmesan as I can’t find that special cheese.

Unlike street vendors, I roasted the corn in the oven but if you have a chance of grilling, it could be better. I wrapped each with aluminium foil and roasted for about 40 minutes. Covering the corn with butter and cheese must be done when the corn is still hot so that they melt well and the corn absorbs the flavors better. Chili powder is not something I could leave out as it gives a wonderful heat and color. Lime juice gives an amazing refreshment which is needed in summer. 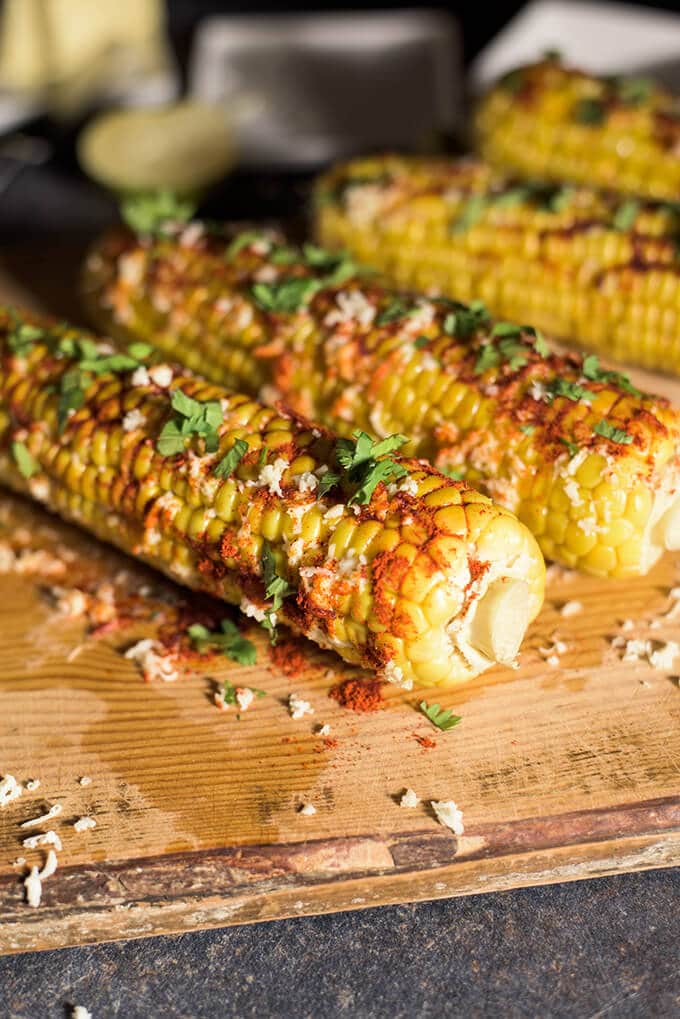 Mexican corn on the cob is so good that I think it’s beyond a snack. I can have these as a meal in summer when I don’t feel like eating anything heavy. If you haven’t had Mexican corn on the cob yet, you’re missing a lot. Try it this summer and you will regret those years behind without this wonderful snack.

Mexican Corn on the Cob 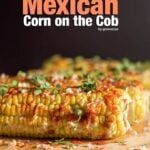 Roasted corn on the cob is covered with butter, parmesan, chili and cilantro. YUM!