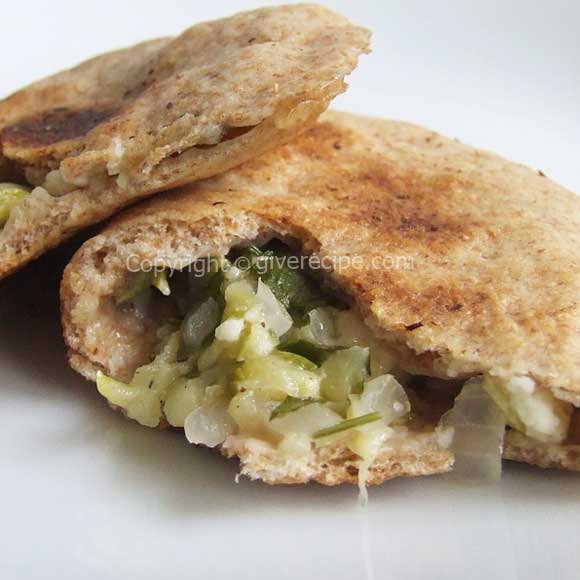 I needed some yeast to make this halfmoon borek and I had my first shopping from a new small market in our neighborhood. It was opened on our street last week. It’s great to see that such local markets are still alive. They have been like animals in danger of extinction since big market chains spread everywhere. These local markets are called bakkal in Turkish and they had a great role in people’s lives about 20 years ago. In the late 1990s big market chains started to appear in Turkey ; first in big cities, then in small cities and in towns, and they gradually replaced small local markets. There were local markets in each neighborhood of a city and they would sell groceries and basic needs of a house. Owner of a local market was not simply a sales person, he was much more than this for the resident of that region. Owners, who are called bakkal as well were generally men and they were called uncle bakkal. Even this addressing shows that he had a very close relationship with people in the neighborhood. People would go to bakkal not only to do shopping, but also to have a friendly chat with the owner.

When a mom or dad needed something at home, they would securely send their children to buy it from their local market. They would trust uncle bakkal so much that they could even leave their house keys to him. (A man forgets his keys, his wife has to go somewhere, so she leaves the keys to their local market so that her husband can take them from there). When a child somehow didn’t find his parents at home after school, he would go ask uncle bakkal if he knew where his parents were. And most probably, uncle bakkal would tell him where they were. He could even wait for them at the market feeling safe with uncle bakkal.

There were no credit cards then, so the solution came from these small local markets. As uncle bakkal knew everyone well, he would allow people to buy what they needed from his market when they didn’t have money. These market owners would keep a notebook in which they wrote people’s names, what they bought, when and how much it costed. Even this notebook had a special name, it was called debt notebook or black notebook (veresiye defteri or kara defter in Turkish). This was a great way to relax people during the financial crisis of the country. So we can even say that the country owes a lot to these small local markets.

Uncle bakkal would always know what his loyal customers wanted to buy, what brand they prefered, how their finance was and would serve accordingly. The relationship between local market owners and their customers was an intimate one which was based on trust.

Is it possible to have such an intimate relationship at big supermarkets today? Both customers and staff of supermarkets do their works without any emotions. The relation between them is just the money they give and take.
With thriving technology, more urbanization, huge supermarkets and shopping malls and with credit cards, customers started to betray their local markets. We witnessed how these small markets tried to survive, couldn’t resist more and were closed one by one in the end. Today, the number of small local markets is very few and the relationship with their customers is not the same anymore, but it’s still more friendly.

So it makes me happy whenever I see a local market is opened somewhere and I prefer to shop there. I think they help people remember that we are socail beings with their smiling face and sincere conversation. I went to our new local market just as I saw it, bought a package of dry yeast and gave my best wishes to our new “uncle bakkal”.

Is it the same in your place? Are there such small local markets? How is their relationship with customers? 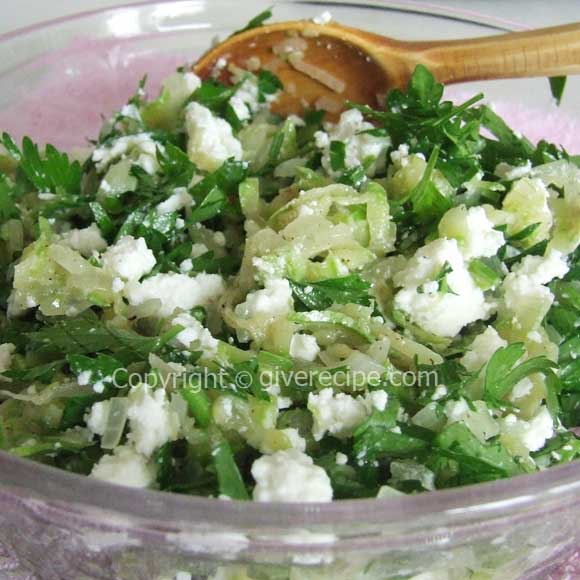 I can eat this mixture even as is at breakfast! You can use your favorite cheese for this borek or you can mix a few cheese types to make it even more cheesy. 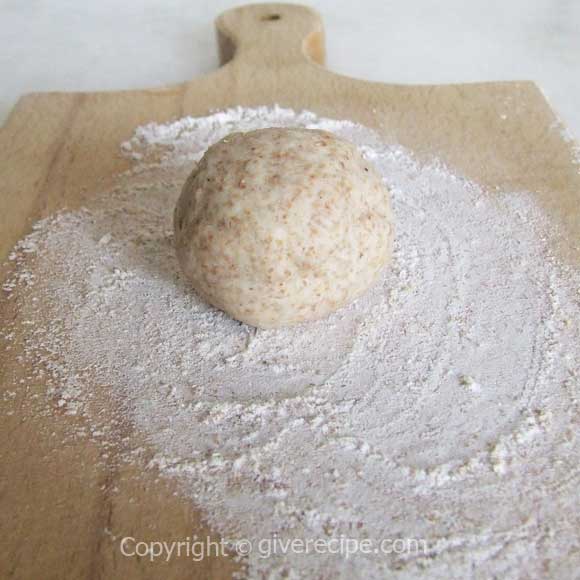 Take one ball and put it on the counter coated with flour. Isn’t it cute? I love to play with these!

Press on it with your four fingers. Sprinkle a little flour on it so that it doesn’t stick to your rolling pin. 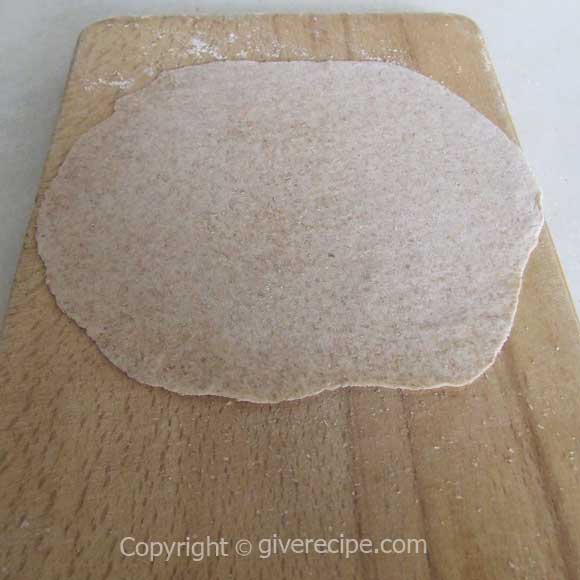 Roll it out. Try to give it a round shape. You can watch how to roll it here. We use the same method for making borek or any kind of phyllo based foods. Ok, mine is not as perfect as mom’s, but it’s not so bad. (This is how we roll a dough, of course you can do it in your way). 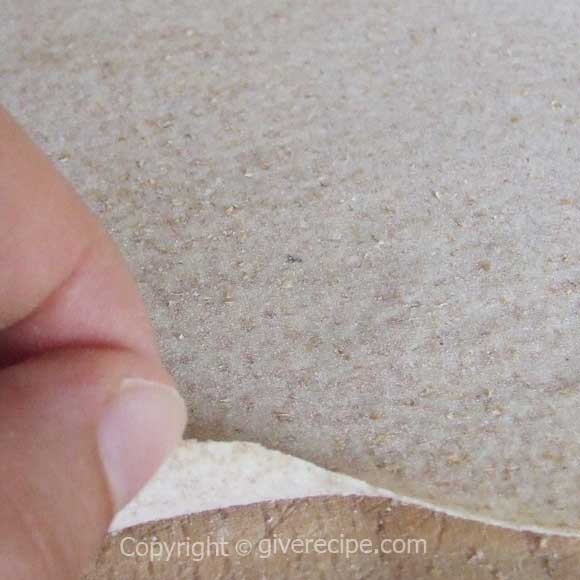 It will be as thin as in this picture. It will rise and get thicker when cooked. 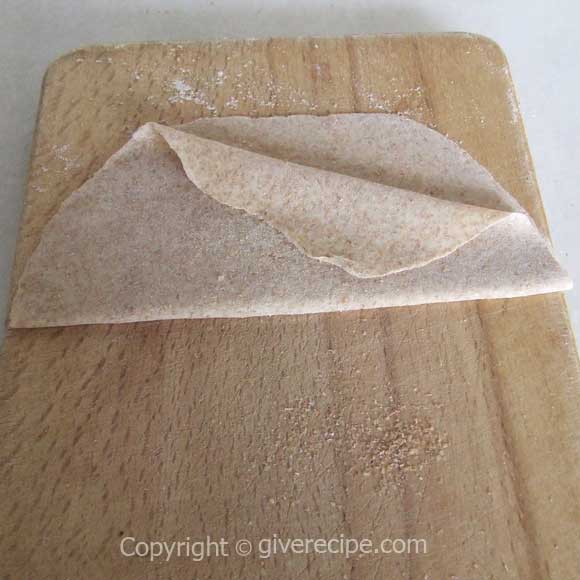 Fold it in two and make a halfmoon. No I didn’t forget to put the filling, it must be empty at this step.

Unfold it and make sure you see a line in the middle. This will function as a border of your borek when putting the filling. (I learnt it from mom. It’s like a work of a tailor, isn’t it?) 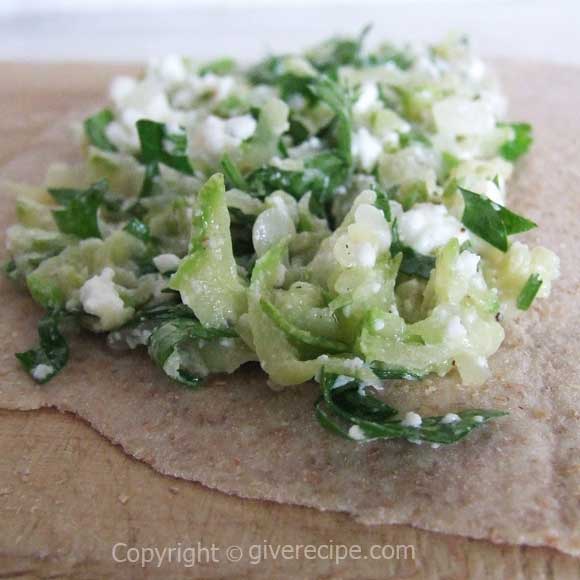 Put some filling on one side of the border. 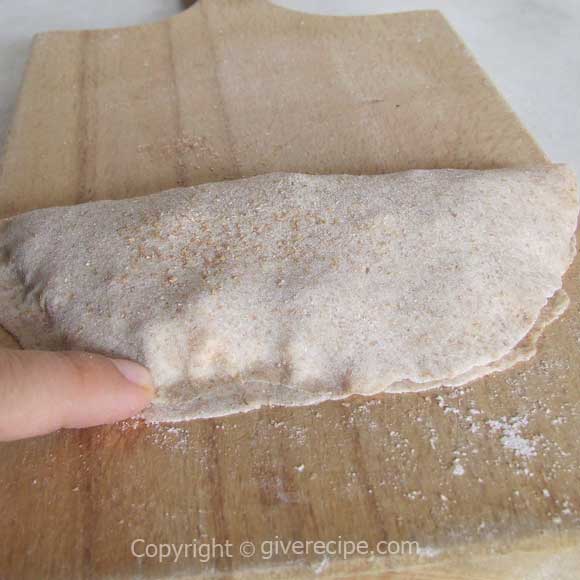 Fold it again and stick the edges with your first finger.

Using a pastry wheel, cut the parts with your finger prints. Do not waste the parts you cut, combine them with other dough balls or save them after each cutting and make a new ball from these.

Now heat an iron cast pan and cook your halfmoon borek flipping occasionally until both sides get brown.

We had these at breakfast and they were perfect! 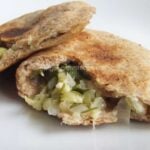 Borek filled with cheese and zucchini mixture. Cook them on a non stick pan.

By the way, I want to share a recipe from a friend, Sue. Although we don’t meet in person, she emailed me asking if she can share a recipe with my readers. What a nice request! I am so much honored. So I’m pasting her recipe of a great breakfast idea as it is in her email. Thank you Sue! I’m so happy to make friends like you. Here is recipe:

So glad to hear back from you Zerrin.

The inspiration actually came from one of those ‘Uncle Toby’s’ 10 little instant porridge sachets in a box.  The flavour was apple, cinnamon and honey – I think.  I used to give them to the kids when they were little – when one of the sachets would actually fill them up.

One day I thought surely I could recreate this.  The first time I improvised I put in honey, cinnamon and grated apple.

Since then if I make it it’s pretty much the oats (not whole – not sure how that would come out) the grated apple, honey and as I tend to have frozen cubes of canned coconut cream in the freezer I plonk in however many I would like plus some water.  Oh, and sultanas (if you like them).  It’s like having a desert really – yum, yum.

I don’t tend to measure any ingredients, except I usually use a generous 1/2 cup of oats (this feeds me).  I simmer the porridge quite a while as I like a smooth, no lump porridge.