I can’t think of a better snack to enjoy game or movie nights than these sweet Cinnamon and Ginger Candied Peanuts. These make impressive edible gifts too as they can stay up to a week or more. These are addictively crunchy and you will see that they disappear in no time, so don’t reduce the amount in the recipe like I did in my first attempt.

I thought I must try it just as I saw Averie’s Cinnamon Sugar Candied Cashews a week ago. Mom and Dad were with us then and I decided to try it with peanuts. Also, I added a little powdered ginger in its coating. As it would be a try, I thought 1 cup would be enough. I was completely wrong! They were gone in seconds and everyone wanted me to make it again on the same day, in larger amounts this time!

I used previously roasted peanuts for this recipe, which, I thought were already crunchy. When coated with cinnamon, ginger and sugar and then roasted for the second time, they became much crunchier thanks to the cinnamon, ginger sugar coating, which makes these the best snack of game nights.

The candied peanuts taste really great with its salty and sweet combination. Cinnamon and ginger make a perfect twist on regular roasted peanuts. You can add other spices you like into the coating to make your version of candied peanuts.

I can hear your question in your mind while reading this post. What makes these spices stick on peanuts? I could have never thought that egg white has such a function if I hadn’t seen Averie’s candied cashews. Thanks a million my dear fellow blogger!

The best thing about these candied peanuts is that it’s so easy that you can put everything in a bowl and then into the oven in a minute whenever you want to take a gift to a weekend party you are invited. I promise these will become the star of the party! Just make sure you make enough of these.

I love the idea of coating nuts with some spices. These candied peanuts became like the fancy store bought ones, so I think I will be experimenting different versions soon. 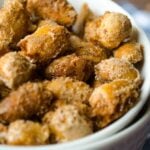